Last year, Dropbox acquired the popular email client Mailbox for $100 million. Rumors started pouring in afterwards that Dropbox might bring the Mailbox app to Android devices, and it turns out they were correct. Recently, Mailbox released their dedicated app for Android, as well as a beta version for Mac.

Mailbox for Dropbox brings the same functionality as its iOS counterpart, and lets users make use of gestures to view their emails, delete them, mark them as read, snooze them so you can read them at a later time, and much more. 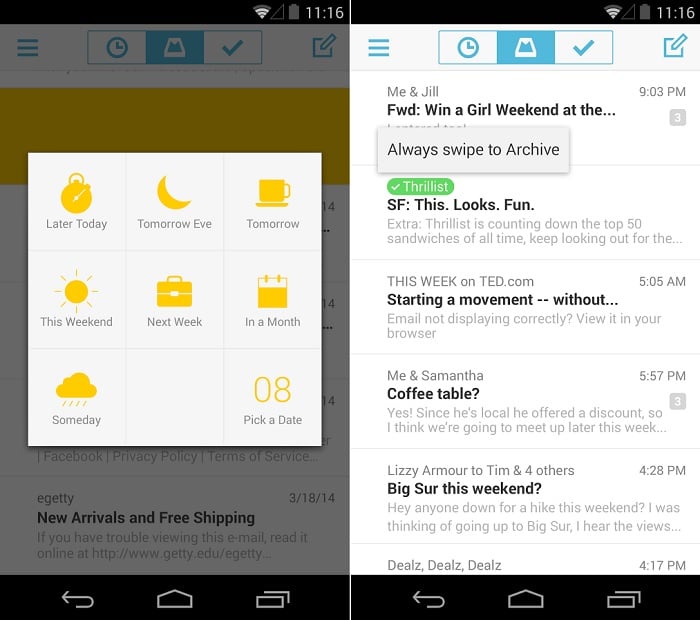 It’s not completely similar to the iOS app, and features an all-new “Auto-swipe” feature, an intelligent system which learns about your actions, which emails you archive and which messages you want to snooze so that you can read them at a later date. So, when you receive an email, it acts based on your previous actions.

Mailbox describes it as, “Today, we’re proud to announce a new service built directly into Mailbox that learns from your swipes and snoozes to automate common actions. Mute that thread you don’t care about, snooze messages from your friends until after work, and route receipts to a list — automatically. We call this service Auto-swipe.”

Head over to the Google Play Store to download Mailbox email client for Android. Also let us know about your reviews if you tried the app, is it on par with its iOS counterpart?

It’s not just Mailbox for Android, the developers released a Mac app is well, which is currently under private beta. If you want to get early access to the app, head over to Mailbox website and sign up for the beta.