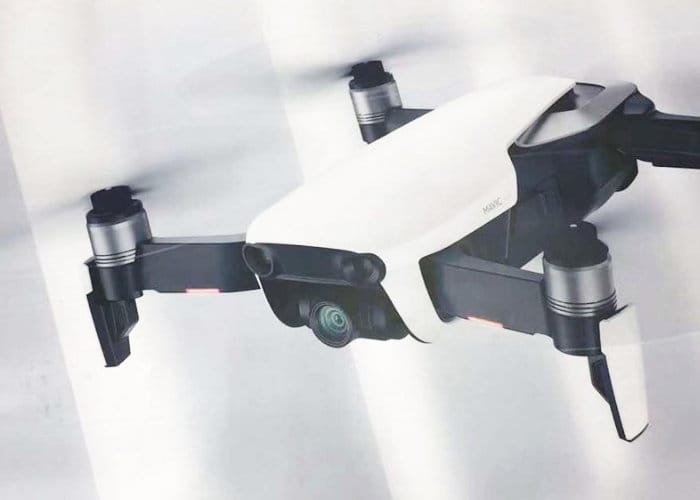 Unfortunately for drone manufacturer DJI, just before they could officially unveil and launch their new 2018 Mavic Air drone. Details have been leaked online providing a first glimpse and specifications of the new drone ahead of today’s official announcement, which is expected to take place very soon.

Building on the technology and design of the original Mavic Air drone launched back in 2016 and priced at $999, the latest Mavic Air edition is now slightly smaller and lighter. The new drone is now capable of capturing 32 megapixel panoramic shots from its built-in camera, which in turn is connected to a three-way gimbal full stabilisation. The small Mavic Air drone is also capable of capturing 4K Ultra HD video although no details have been leaked on available frame rates at this resolution as yet.

The 2018 Mavic Air drone shares a design that is similar to last year’s DJI Spark drone priced at $499. DJI have also included the ability to control the drone using gestures, and equipped the lightweight flying vehicle with obstacle avoidance sensors, folding arms and a rechargeable battery that is capable of powering the drone for up to 21 minutes of flight. The Mavic Air 2018 drone will be available in a selection of colours including black, red and white with other colours possible made available sometime after launch.

As you expect from leaked information the images and specifications have not yet been confirmed by DJI, but everything will be unveiled later today including higher resolution images of the 2018 Mavic Air drone, possible video footage of the drone in flight and the full list of all available specifications and pricing. As soon as more details are officially announced by DJI later today we will keep you up-to-date as always.