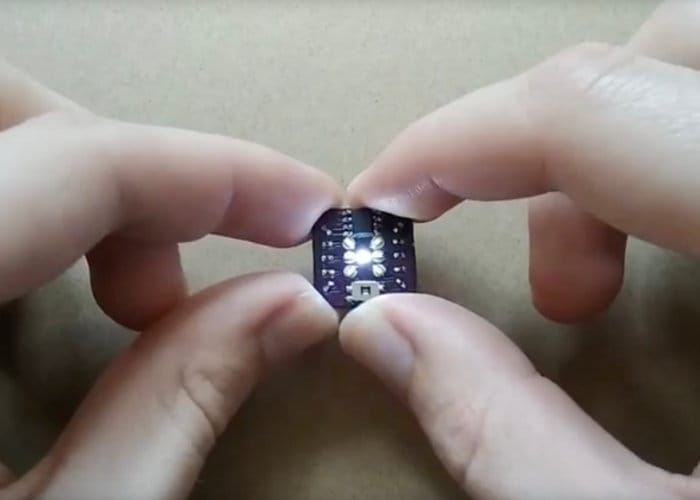 Rolling traditional dice can sometimes be a little inconvenient but using an application on your smartphone is not always the better choice. However a tiny electronic dice created by Zak Kemble is an awesome alternative to standard dice, and measures just 18mm x 18mm and 4.9mm thick and weighs just 2.1 grams.

Watch the demonstration video below to learn more about the electronic dice project which was created using seven LEDs together with a ATtiny25V, a CR1616 coin battery providing around 50 to 60 mAh. “Rolling the dice 20 times a day should result in a battery life of around 2.5 years. When the voltage is below 2.4V the center LED will quickly flash a few times to notifiy the user of the low battery before going back to displaying the dice roll value.”

“There’s only one button, the roll button, which when held down will cause the dice to roll through numbers 1 to 6. After releasing the button the rolling will slow down until the last change where it will instead use a randomly generated number sourced from an XORShift random number generator algorithm (nabbed from here). XORShift algorithms are great for their speed and small code size while still maintaining excellent randomness. The final value flashes a few times, then after a further few seconds the dice turns off.”

To create your very own electronic dice project jump over to the official Zak Kemble website for inspiration wiring diagram and details.