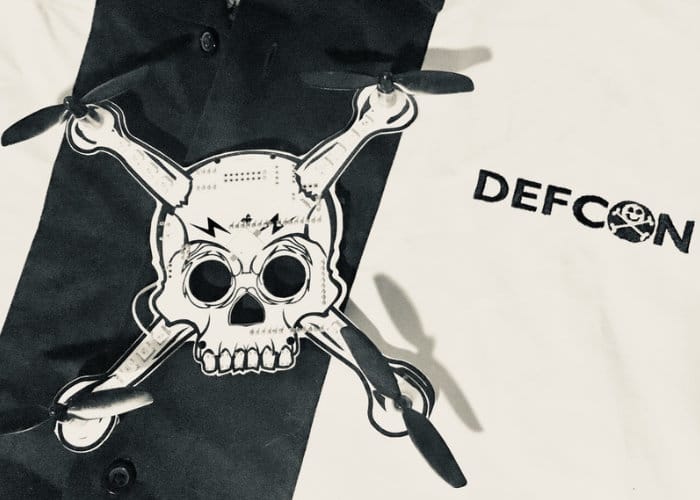 Anyone attending this year’s DEFCON 26 hacking conference which will take place from August 9th -12th, 2018 and is searching for an appropriate badge may be interested in this awesome DEFCON 26 flying electronic quad-copter badge created by b1un7. Check out the video below to learn more about he unique quad copter badges construction and features.

b1un7 has taken to Kickstarter this week and already raised over 10 times the required pledge goal with still 10 days remaining on its campaign. Pledges are available from $65 or roughly £48 for the badge board skull with Arduino Leonardo development Board.

“B1un7’s been attending DEF CON since year 10 and has seen all  the electronic wearable badges since their inception from 1057.  Like most of us, he was completely taken by not only their ability to be hacked on, but by their majestic beauty as well.  Inspired by Whiskey Pirates badges for the last few years, he took it upon himself to create a badge like no other; one that would  fly! For a year he enveloped himself in the creation of his first badge, the DEF CON 25 Friends of B1un7 Flying Skull.  During this silver anniversary celebration b1un7 created just 25 of these amazing badges, given only to his closest friends, mentors, and those that inspired him through those years prior of cons.

This year’s badge is truly a thing of beauty! Having taken all he learned from creating last year’s badge, improving upon the design, making it more versatile in the types of Flight Control Units (FCUs) it can be flown with, it has evolved into something more, something exciting!”

To get your hands on the awesome DEFCON 26 flying electronic quad-copter badge jump over to the official Kickstarter crowdfunding campaign page by following the link below.