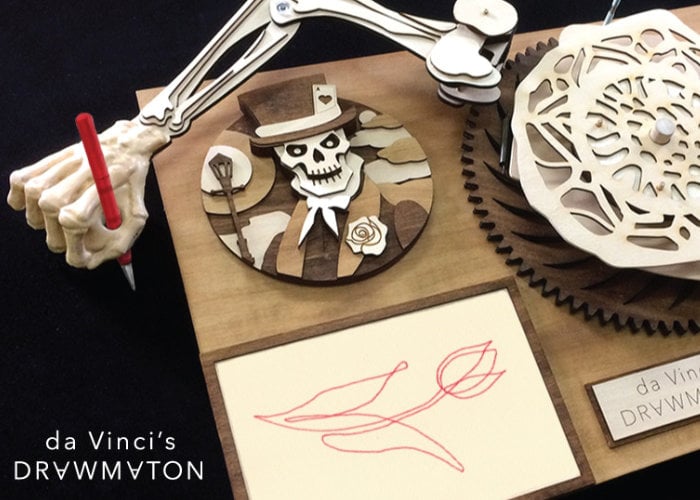 The Leondardo da Vinci Robot Society Has taken to Kickstarter this week to launch a new campaign to promote their new Da Vinci’s Drawmaton robot kits. Providing a working model of Leonardo da Vinci’s early computer, “a wooden programmable robot that draws”. watch the demonstration video below to learn more about the system and its components.

Pledges are now available from $99 or roughly £77 for early bird backers with shipping expected to take place sometime around June 2019. “For the longest time it has been the dream of the Leonardo da Vinci Robot Society to bring one of the Renaissance master’s creations back to life for the world to enjoy. Da Vinci’s most famous robot, the mechanical knight built over 500 years ago, was able to perform several tasks and was even rumored to be able to draw. When we met mechanical paper engineer extraordinaire Robert Sabuda, also a huge da Vinci fan, it was a match made in heaven! Through careful research of da vinci’s original drawings and plans in the Codex Atlanticus, da Vinci’s notebook dealing with robotics, Sabuda and his team have finally unraveled the mechanics and brought the machine into the 21st century!”

For more details and a complete list of all available page options and robot kit styles jump over to the official Kickstarter campaign created by the Leondardo da Vinci Robot Society via the link below.