Google and Mozilla have today released a WebRTC demo video showing how their two browsers Chrome and Firefox can now let users communicate via video and chat using WebRTC.

WebRTC has been developed and is a new set of technologies that allows clear crisp voice, sharp high-definition video and low-delay communication via web browsers. Watch the video after the jump to see it in action between Firefox and Chrome. 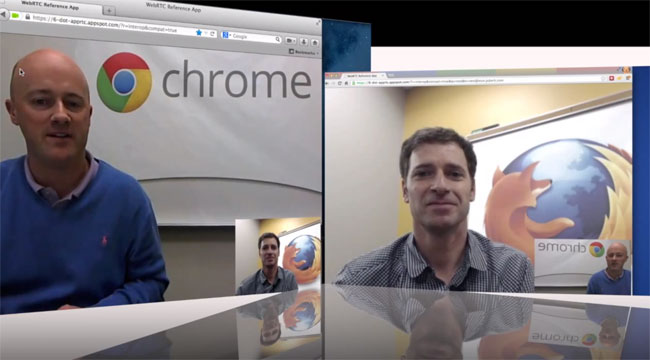 Google explains a little more about the WebRTC demo and development: “From the very beginning, this joint WebRTC effort was embraced by the open web community, including engineers from the Chrome and Firefox teams. The common goal was to help developers offer rich, secure communications, integrated directly into their web applications.”

“In order to succeed, a web-based communications platform needs to work across browsers. Thanks to the work and participation of the W3C and IETF communities in developing the platform, Chrome and Firefox can now communicate by using standard technologies such as the Opus and VP8codecs for audio and video, DTLS-SRTP for encryption, and ICE for networking.”

For more information on the new WebRTC jump over to the Google Chromium Blog  and Mozilla website for details.