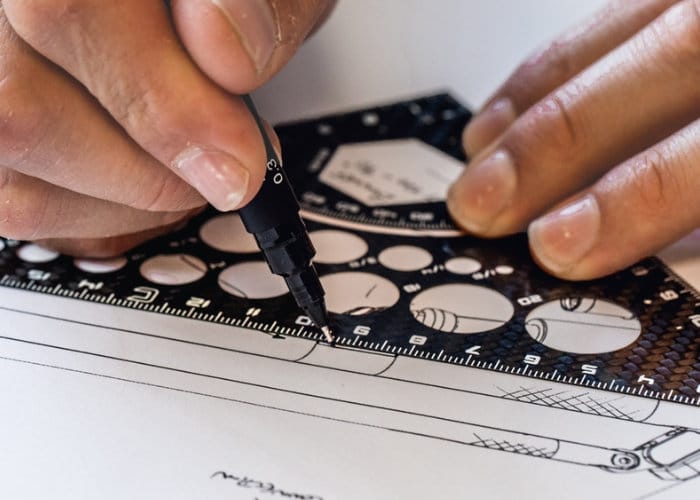 Carbon13 has created a new geometry drawing set aptly named the Carbon which takes the form of a C13 set which is now available to back via Kickstarter with early bird pledges available from just 5 pounds on delivery expected to take place during September 2018. The developing team behind the Carbon C13 geometry drawing set explain more about its inspiration and design.

“Without a doubt, our most requested project to date has been a full geometry set. We listened, we designed, we waited, we redesigned and now we are ready to launch. With completely re-done scales, updated shapes and the introduction of our new Super Light series, its safe to say we’re really excited to present these to you.”

Equipment included in the set take the form of :

– C15 SuperLight – A 15cm ruler, with edge-to-edge scales in both metric and imperial increments. At just 0.5mm thick, this ruler is incredibly light, extremely flexible and nearly invisible when stored inside a notebook. It is thinner, lighter and shorter than the original C13 ruler, yet has longer and more usable scales. Progress!
– C31 SuperLight – We’ve also completely redesigned the 31cm ruler. With new scales, an updated shape and an even thinner build, this super light version is incredibly flexible and we know you’re going to love it.
– U-Square ‘Super8’ – Robust, handy and super useful, the Super8 is named for its 8cm longest edge. It has 4 scales in total, 2 each in metric and imperial as well as a full set of our trademark compassing holes. The U-Square is 0.8mm thick and is designed as the perfect grab-and-go ruler that you’ll keep in your wallet or purse!
– Large Square SL – Kicking things off with the true geometry tools is the most requested individual piece we have been asked for – a Carbon Square. 3 sides with end-to-end scales, a protractor, compassing holes and a bunch of handy circle sizes too. At just 0.5mm thick, this square is super duper flexible and disappears into an A5 notebook (or bigger) when you’re not using it. For those that use the metric system, you’ll be pleased that all 3 sides are in centimetres. For those that want imperial – we do one of those too. Just let us know in the comments and on your backer survey!
– Small Square SL – The same features as its bigger brother, but in a palm-sized form. This one can be stashed inside an A7 notepad or even wallets!

For a full list of all available pledges and various kit combinations jump over to the official crowdfunding campaign page by following the link below.