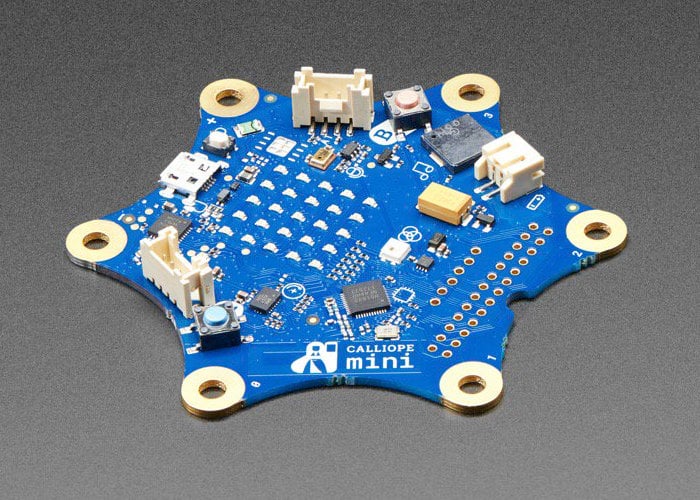 Students, electronic enthusiasts and makers looking for an upgrade to the popular BBC micro:bit mini PC might be interested in the new Calliope Mini which is now available to purchase directly from the Adafruit online store. Similar to the micro:bit the Calliope Mini offer is a derivative mini PC equipped with a variety of extra components including an LED matrix, Bluetooth connectivity, programmable buttons, analogue inputs and more.

Adafruit explains a little more about the new mini PC. “The Calliope Mini can be programmed through Microsoft MakeCode just like the ‘bit, including radio communications and displaying on the 25 LED matrix! It can also run micropython code on the micro:bit – we would recommend using the default micro:bit micropython build and then using the accessories on-board as if they were wired to a ‘bit on a breadboard or with alligator clips.”

Specifications of the Calliope Mini increasing include :

“Willkommen, Calliope Mini! Developed in Germany for students in primary school and up, this heavenly star-shaped development board is a souped-up derivative of the micro:bit. The main chip on the Calliope is the same nRF51822 as the micro:bit so for many purposes, it can be programmed the same way. There are some big upgrades though!”

The Calliope Mini is now available to purchase directly from the Adafruit online store priced at $49.95.