Fortunately, not every female from California is like what’s described in Katy Perry’s insipid pop ditty. Rather than go for daisy dukes with bikinis on top, Angela Zhang researched hard enough to create a particle that could tackle cancerous growths on a cellular level. Her minor breakthrough, which she described as a ‘Swiss Army Knife’ approach to experimental cancer treatment, bagged her an individual top prize and $100,000 in a Washington ceremony. 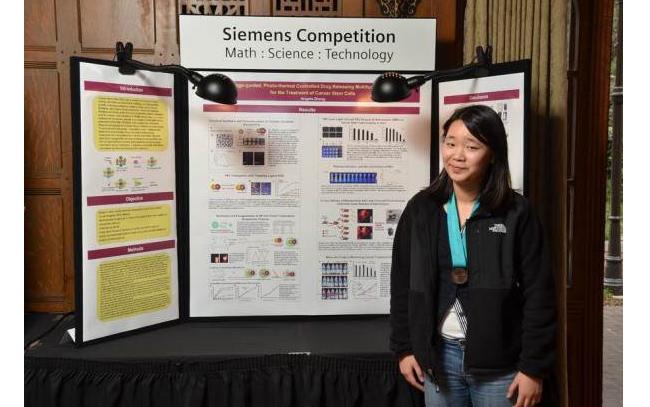 The 17 year old high schooler, pictured above with her game face on, hails from Cupertino and was inspired by the ordeal of her grandparents. Zhang’s great-grandfather and grandfather were both cancer victims. She got the opportunity to deliver the goods on cancer research via the Siemens Foundation, which organized the high school-level competition she just aced.
Zhang, however, has the smarts and insight to admit that her newfangled particle method is so far out, it might take a quarter century of research before it can even be patented.
Other than Zhang, a similar amount was given to a tandem and $50,000 went to runner ups. Because of people like Angela Zhang, there is hope for the human race. Quick, someone play Queen’s ‘We are The Champions.’
Source Washington Examiner
Filed Under: Geeky Stuff, Technology News