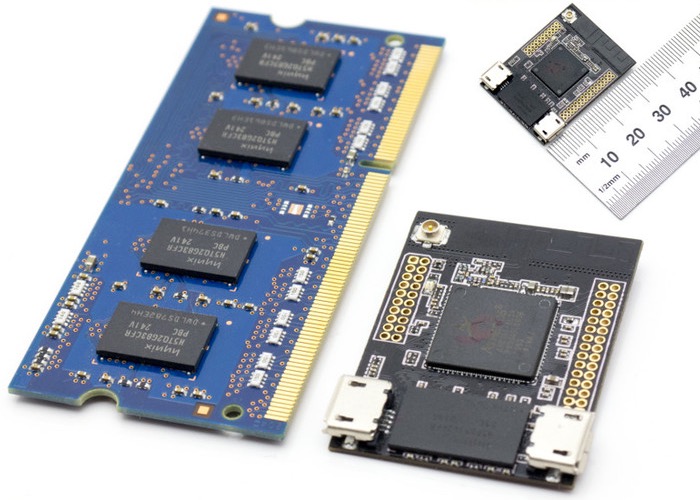 Makers, developers and hobbyists that are looking for a tiny wireless computer equipped with ability to be added to other projects might be interested in a new piece of hardware called the Black Swift.

The Black Caps swift is a tiny wireless embedded computer that has been created by Alexander Nikitin and offers a powerful affordable open source computer that is capable of running Linux. Watch the video below to learn more about this truly tiny computer.

The Black Swift computer requires just a 5 VDC microUSB power adapter to power-up and has been designed to be seamlessly integrated in other electronics projects. The Black Swift computer runs OpenWRT Linux, and it can be programmed using a variety of different languages including C/C++ to PHP, Python, Perl, and Bash scripting and even a Node.js port. Russian engineer and developer Nikitin explains a little more.

“The Black Swift computer project is currently over on the Kickstarter crowd funding website looking to raise $33,000 in pledges to make the jump from concept to production.

In a few words, Black Swift Board is a tiny — almost coin-sized — computer with 32-bit CPU, megabytes of memory, integrated 802.11 b/g/n Wi-Fi, USB 2.0, and other interfaces. It was created to become not only affordable and easy to use computing and communication core for modern connected devices, but also the great tool for anyone interested in electronics.

We made it with both professionals as well as enthusiasts in mind. Black Swift is great as professional-grade embedded computing core in the Internet of Things era — and at the same time it is easy to learn and easy to use, allowing novices to gradually raise their experience.”