Filipino industrial designer Kenneth Cobonpue has finally transcended the humdrum of furniture and made an impressive jab at an automotive project. If you’ve never heard of him before, catch the last music video by Maroon 5. One of his beds is actually being lain on by the band’s singer and some chick. 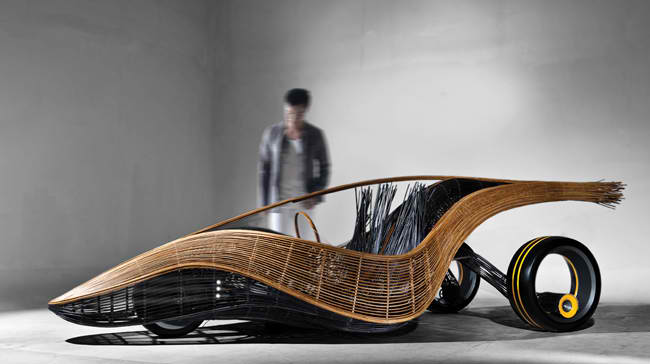 Moving on, pictured north is the Phoenix Roadster, an odd handle for a not-so-sexy car whose only impressive feature is a body that’s made of bamboo and rattan. That means 100% biodegradable and ultra cheap manufacturing (if ever). Of course, bamboo vehicles are old news and we panned a bamboo rickshaw some weeks back. (Or was it last month?) Still, the virtues of bamboo should not be ignored. No other plant material in the world is as tough or durable as the giant grass.

Mr. Cobonpue (pronounced Koh-bon-pweh) has a professional knack for using organic materials on his creations. The car concept that he co-designed with a German collaborator, is a departure of sorts from his usual works. While it may not have an engine yet and is essentially nice decoration at best, the idea behind the car has what it takes to endure as a constant theme in modern design.