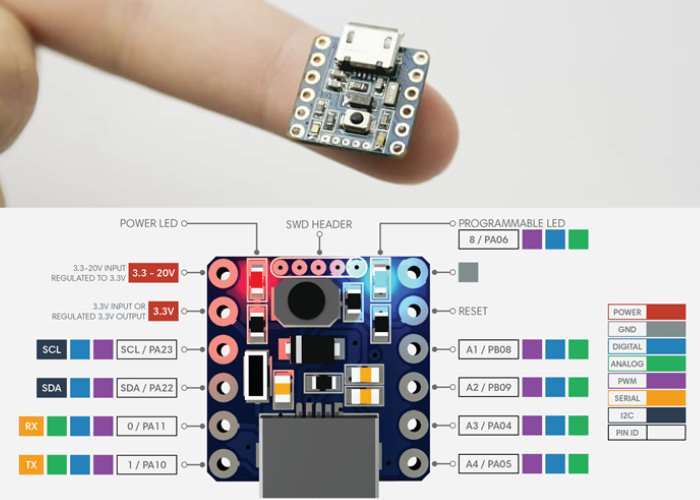 Electronics enthusiasts, makers and developers searching for a super small 32-bit Arduino development board may be interested in the Atom X1 which has been created by Hayden Barton, based in the United Kingdom.

The Atom X1 offer is a tiny breadboard compatible microcontroller measuring 14.9x14.9mm and featuring 3-20V input, I²C, 8x PWM, Serial, 6x ADC and programmable LEDs. The Atom X1 is now available to back via Indiegogo with pledges starting from just £10 and shipping expected to take place during December 2017.

Watch the demonstration video below to learn more about the tiny Arduino development board.

The Atom X1 from Nerdonic is a tiny 32-bit microcontroller compatible with arduino and breadboard development. It’s not just small, its powerful too running at 48MHz clock with 256KB ROM, 32KB RAM and 8 pins filled with functionality. The Atom X1 is fully compatible with breadboard development and the Arduino IDE and comes with the Arduino Zero bootloader pre-flashed. Measuring just 14.9mm2 at 0.95 grams, the Atom X1 is small aswell as powerful. For size comparison is a UK 5 Pence coin (Equivilent size to a US Dime). Show your code status, an error or make it flash when each code loop is complete, the onboard programmable led can be programmed however you like.

Jump over to the Indiegogo crowdfunding campaign page by following the link below for full specifications and all available pledges.