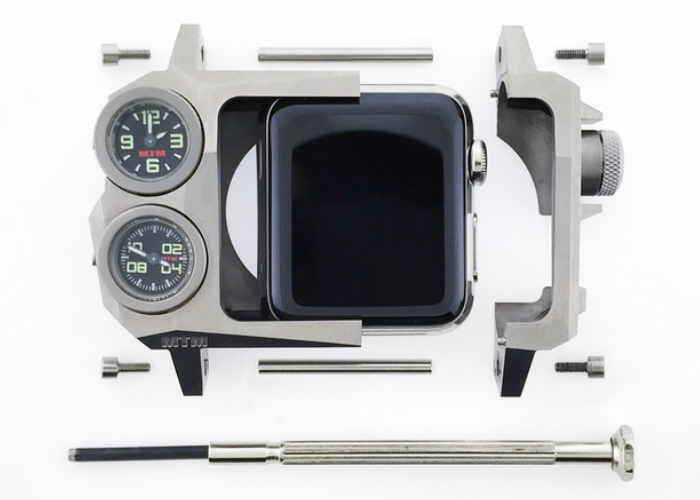 Anyone taking their Apple wearable into harsh environments may be interested in a new Apple Watch protective case which has been created by MTM Special Ops Watches and provides a weapons grade aluminium or titanium casing that will keep your Apple Watch protected from the elements and anything else you can throw at it.

Watch the video below to learn more about this unique Apple Watch case which is taken to Kickstarter to raise the $50,000 it requires to go into production.

The design team behind the unique Apple Watch case explain a little more about its inspiration and design :

Hopefully you already own an MTM watch or have seen us before, but for those of you who do not recognize the MTM Special Ops Watch brand, we have been a driving force in tactical military watches worldwide for over 25 years. We are based in Los Angeles, CA and we always strive to bring our customers the best blend of style, function and strength. When the Apple Watch was released, we saw an opportunity to create something special. The obvious problem with the Apple Watch is its vulnerability. Its exposed glass and current band options are two primary concerns. We would like all Apple Watch wearers to be able to rely upon its performance consistently under extreme and harsh outdoor conditions. This is why we developed MTM Status

We have decided to develop a new and different type of protection for the 38mm Apple Watch. We have designed a “surround” that incorporates two analog quartz “micro-dials” and standard watch lugs. This quickly resolves the common dilemma of a dead battery for various survivalists, hikers, and outdoorsmen alike. Each micro-dial is interchangeable and a customizable feature of the watch. A 12-hour clock and compass come standard with each MTM Status.

For more information on the new Apple Watch protective case jump over to the Kickstarter website for details by following the link below.