On Wednesday, Valleywag put up an article where they offered up to $100,000 for evidence of the much rumored Apple Tablet, and it looks like Apple weren’t to happy about it as Valleywag’s parent company Gawker, who also own Gizmodo and a number of other high end websites, have received a letter from Apple’s lawyers. 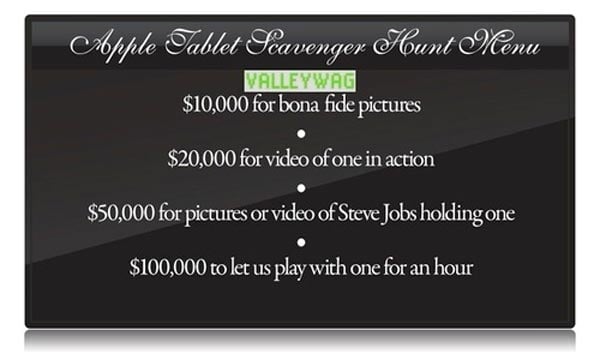 “I am writing on behalf of Apple regarding the notices on Gawker.com and Valleywag.com Web sites that Gawker Media will pay someone a financial reward for sending you photos, video, or a sample of an unannounced and highly confidential Apple product.”

Historically when Apple has sent a letter from its lawyers in the past, the Apple product concerned has existed, so could this be confirmation of the much rumored Apple tablet.

I guess we will just have to wait and see until January the 27th, when we hope Apple will finally reveal their Tablet, and this will put a stop to the endless rumors.