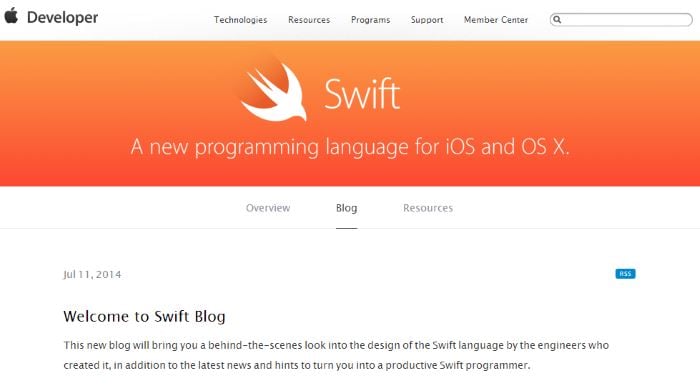 Back at the WWDC 2014 last month, Apple didn’t only unveil the iOS 8, but they also announced a new programming language known as Swift, which is set to replace Objective-C which was used to develop apps for iOS and OS X. The new language provide rich tools and is more robust when it comes to developing applications.

To help the developers know more about the language, Apple has started a blog to share highlights about the new programming language.

This new blog will bring you a behind-the-scenes look into the design of the Swift language by the engineers who created it, in addition to the latest news and hints to turn you into a productive Swift programmer.

Get started with Swift by downloading Xcode 6 beta, now available to all Registered Apple Developers for free. The Swift Resources tab has a ton of great links to videos, documentation, books, and sample code to help you become one of the world’s first Swift experts. There’s never been a better time to get coding!

In the first blog post, the company mentioned its Swift language engineers will share tidbits, news and other support articles to help you learn this new language, and develop apps for both platforms.

The company also took its time to mention some details about the compatibility of the apps created using the language. The company said Swift apps will be compatible with OS X Mavericks and iOS 7, as well as the future releases. There’s no word about the older versions, but it is unlikely the apps will run properly on previous versions.

Simply put, if you write a Swift app today and submit it to the App Store this Fall when iOS 8 and OS X Yosemite are released, you can trust that your app will work well into the future. In fact, you can target back to OS X Mavericks oriOS 7 with that same app. This is possible because Xcode embeds a small Swift runtime library within your app’s bundle. Because the library is embedded, your app uses a consistent version of Swift that runs on past, present, and future OS releases.