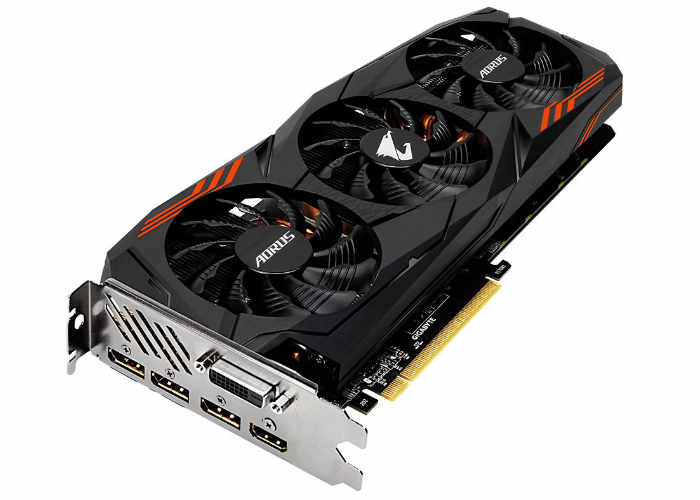 The Aorus GTX 1070 Ti is fitted with a WINDFORCE 3X with Blade Fan Design together with Advanced Copper Back Plate Cooling and offers RGB Fusion-16.7M customisable colour lighting and extreme overclocking with 6+2 power phases. The card features a different PCB and cooler to those of the GIGABYTE GTX 1070 Ti Gaming because NVIDIA doesn’t allow factory-overclocked GTX 1070 Ti graphics cards at the current time.

Features of the Aorus include :

– The pure copper heat pipes are shaped to maximize the direct contact area to the GPU for enhanced thermal transfer.

– Excessive heat from GPU not only gets dissipated utilizing the massive cooling module in the front but also through the back side with a copper plate, providing a well-rounded thermal solution for the GPU.

– The airflow is spilt by the triangle fan edge, and guided smoothly through the 3D stripe curve on the fan surface, effectively enhancing the airflow by 23% over the traditional fans.

– The AORUS graphics cards are equipped with 3D-Active Fan. The fans will remain off when the GPU is under a set loading or temperature for low power gaming. 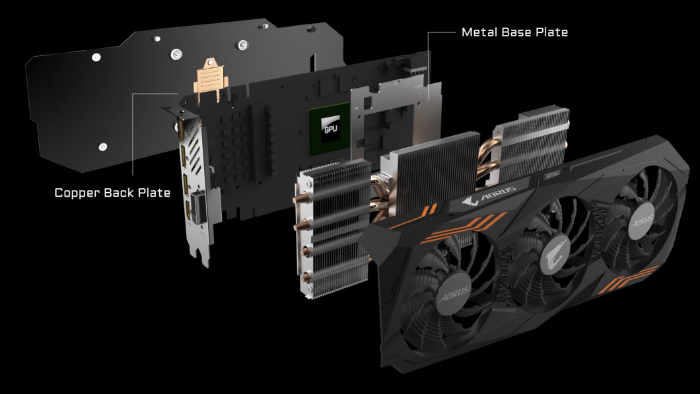 AORUS provides the all-around cooling solution for all key components of the graphics card. We take care not only GPU but also VRAM and MOSFET, to ensure a stable overclock operation and longer life. On the front side, the GPU direct touch heat-pipes combines a metal base plate to dissipate the most heat from the GPU and VRAM. On the back side, the copper back plate dissipates the heat from the GPU back side. All other key components are taken care of very well by the WINDFORCE cooling module.