Google announced the next version of Android would be Android 4.4 Kit Kat at the start of this month, making a surprising move away from the rumours Key Lime Pie name that thought would be used for the next Android release.

Now Android fan Craig Tuttle has created a new video showing what he thinks might be included in the Android 5.0 when and if it ever gets released. 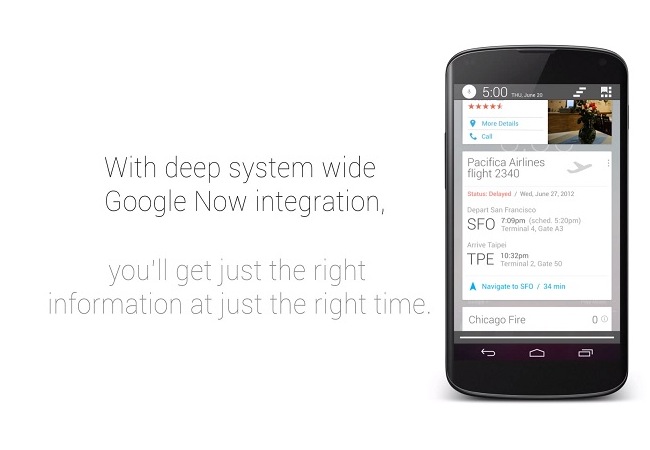 The vision for Android 5.0 is very polished and includes a number of innovative features that would definitely improve the Android mobile operating system. Focusing on bringing deeper Google Now cards integration, including introducing several changes to the notification bar.

“Creative concept videos have always brought me a sense of wonder and dreaming of what the next iteration of OS software might be like. About 4 month ago I decided to make it a personal goal to make a video mockup of a piece of software and the timing was just about perfect to get in an Android 5.0 concept video before its release in October. Google however decided to throw out a surprise in Kit Kat 4.4. So instead of switching all of the numbers throughout the video I just decided to leave it as 5.0.

When I sat down to figure out where Android had a chance of heading, I started by asking the question “Where does Google and the Android team seem excited to move?”. Through this question, the answer seemed obvious: information magically delivered without the user even having to ask for it. Google Now is their giant leap into this area of predictive search, so why not combine the rest of android with Google Now? Most of us live our lives through our phones, so why not utilize that data. When a new text comes in, Android analyzes it and brings up relevant information. A friend asks if you want to see The Hobbit at 7pm and Android automatically adds this time to your calendar if you reply yes. Its these tiny optimizations that would make an OS and life so much simpler.

I tried to pull from the design cues that the Android team has drop into its own apps over the course of the summer. You’ll notice that much of the UI has transitioned from the darker holo to the lighter holo coloring. “