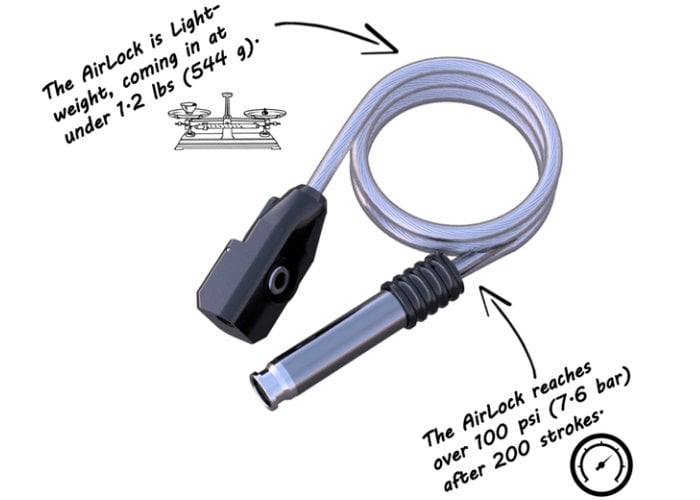 Cyclists may be interested in a unique multifunctional bike pump and lock created by Edellocks. The aptly named AirLock has launched via Kickstarter this week and is now available to back with early bird pledges starting from $50 or roughly £42, offering a 27% discount off the recommended retail price.

The AirLock includes a 3.5″ aluminium pump and steel locking components, together with durable vinyl tubing and a 6/16″ diameter enclosing a 1/4″ steel cable. Edellocks will offer both Schrader and Presta valve versions of its Airlock, learned more about its design in the demonstration video below.

“Like traditional cable locks, the AirLock includes a braided steel cable that wraps around your frame. For added safety, the AirLock’s braided steel cable is thicker than those used by Kryptonite, Master Lock, and others. The AirLock comes with a 30″ cable that is long enough to get the job done, yet easy to store and carry. The Airlock’s simple innovative design is easy to use by cyclists of all ages. Now there’s no need to carry around two devices instead of just one. “

“We created 20+ prototypes over the last three years of development. As such, we’re confident in the final design that we now have pushed to production. Edellocks has partnered with experienced bike pump and lock manufacturers in Taichung, Taiwan – the epicenter of bicycle equipment manufacturing.”