Its been a few days since HTC unveiled their latest flagship HTC One M8 at a press event in New York. The handset received pretty decent reviews from the tech community, but it seems the Taiwanese OEM is working on another device.

A mysterious new device was spotted on AnTuTu benchmarks with high-end specifications, but there’s word if its a tablet or a smartphone. We’re guessing it might be a tablet since HTC already unveiled the primary flagship of the year. 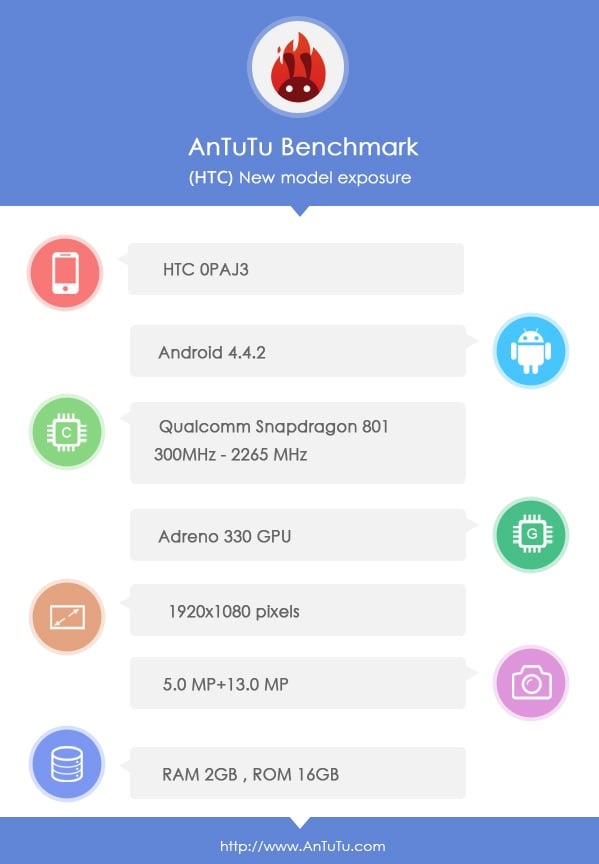 Recently, we spotted the HTC One M8 Mini, but I doubt if the device in the benchmarks is the One Mini. Anyway, the device comes with a HTC OPAJ3 model numbers and features 1080p resolution. Under the hood is a 2.26GHz quad-core Snapdragon 801 chipset with Adreno 330 GPU and 2GB of RAM.

Other leaked features include 16GB storage, 13MP camera for photos and videos with a 5MP front-facing camera similar to the HTC One M8, and comes with Android 4.4.2 KitKat as its operating system.

It could be the rumored HTC tablet we’ve about a few times in the past weeks — there’s a possibility we can’t deny. But, let’s just take it with a pinch of salt. We’ll definitely get to know more about this alleged device in the future. Until then, speculate as you may.