Sarah Marie Alida Parries was a five-year-old from Vancouver, British Columbia who liked playing a free-to-play mech shooter called “Mechwarrior Online” with her dad. She would pilot her favorite mech, called a Jenner, and school all the older gamers more often than not. Unfortunately, she wasn’t a part of the gaming community for long. A few months ago Sarah lost her fight with inoperable brain cancer.

But her story doesn’t end there. Infinite Games Publishing and Piranha Games, the maker’s behind “Mechwarrior Online” were so touched by this little girl’s passion that they created a mech in her honor. Anyone playing the game can purchase “Sarah’s Jenner” for $10, and all the proceeds of the purchase will go to the Canadian Cancer Society. 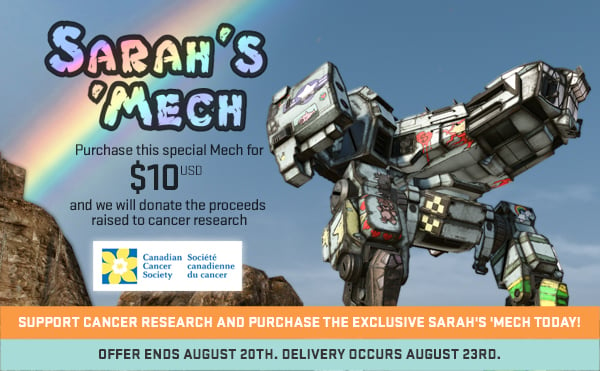 The community of online gamers is a vicious lot. While mature players do exist, they’re grossly outnumbers by immature teenagers and 20-40 year-olds who seem to think the internet is a place where they can cuss like sailors and pretend to be as tough as they aren’t. These people give gamers a bad rap, but sometimes the positive side of the community surfaces to save face for all of us.

I might just have to update my “Mechwarrior Online” client and jump in for a bit now.