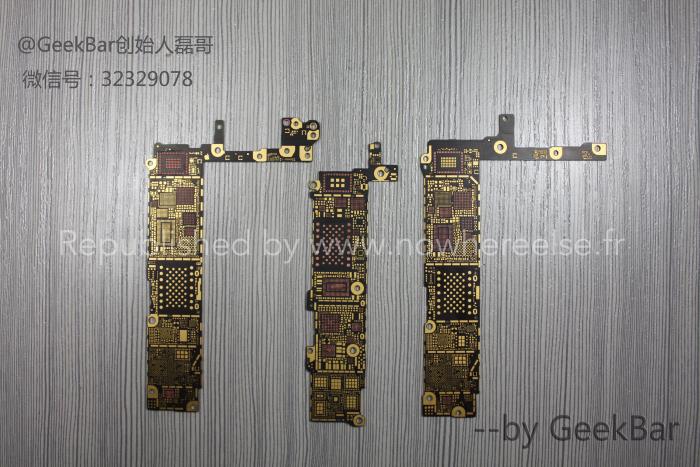 Over the weekend, the folks at NoWhereElse posted some leaked images believed to be of the alleged 4.7-inch iPhone 6 logic board.

Now, they have posted some more photos of the same logic board for both the 4.7-inch iPhone 6, as well as the 5.5-inch iPhone 6.

The images compare the logic board of the iPhone 5S with the upcoming iPhone 6 models. There are three logic boards, but the images doesn’t list which one belongs to which device. However, if you take a closer look at the image, you can notice a considerable difference in the size of the components. Apart from the size, there’s a difference in the screw placement as well, which is clearly noticeable.

Apple is rumored to be working on two new iPhone 6 models, which are expected to launch later this year. Rumors suggest Apple will take the wraps off the 4.7-inch iPhone 6 in September, while the phablet sized model may see the light of the day in December. Both devices will come with an A8 processor, Touch ID sensor, NFC, an improved camera and iOS 8 as its operating system out of the box.

We’ll update you as soon as any other information comes up. Stay tuned.