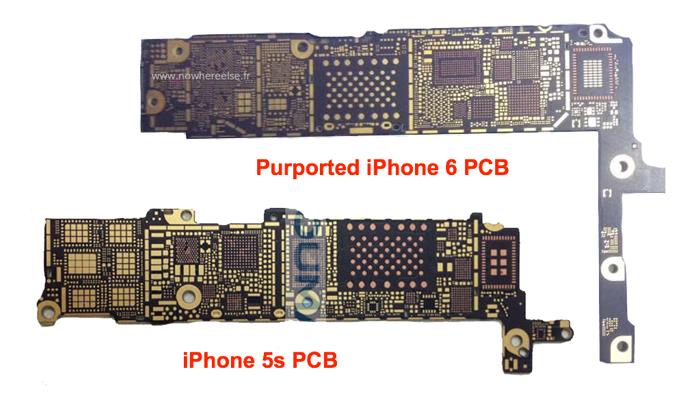 We’ve seen countless number of leaked parts of the alleged iPhone 6, as well as information about what the upcoming Apple device would bring on the table.

Recently, the folks at NoWhereElse, managed to grab some images of the alleged logic board of the upcoming iPhone 6, which is compared with the same component from the current iPhone 5S.

The images are said to come from a “particularly reliable” source from China. While most of the aspects look exactly the same as the board found inside the iPhone 5S, there are some minor changes between the two. The alleged component features a NFC chip, as well as a wireless 802.11ac Wi-Fi module, which are the first ones to make an appearance on Apple device.

Let’s just take this rumor with a grain of salt no matter how good the track record of the source is. Apple is rumored to be working on a new iPhone 6 with a larger display — 4.7-inch and 5.5-inch. The device is expected to come with a 64-bit A8 processor, an improved camera, Touch ID sensor, sapphire glass display and iOS 8 as its operating system out of the box.

There’s no official word from Apple, and there won’t be before the official event. We’ll update you if any other news comes up.