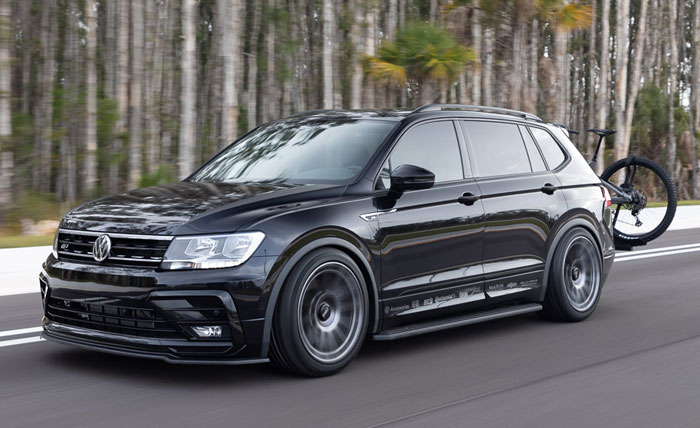 Volkswagen has unveiled a new concept vehicle called the Tiguan SE R-Line Black RiNO Concept. The vehicle gets its name from the Riverside North arts district in downtown Denver, Colorado. The concept was designed by Jamie Orr and partners from the automotive aftermarket.

The vehicle is designed to showcase the athletic mid-size SUVs adventurous lifestyle and is intended specifically for mountain biking fans. The designers worked with a California-based company called Marin Bikes to pair the Tiguan with a gloss black carbon fiber Alpine Trail 2 mountain bike.

The concept car is also fitted with a Thule T1 bike rack that mounts to the 1500 pound rated 1.25-inch receiver on the vehicle’s rear. The Black RiNO Concept uses wider tires as standard mounted to a set of Rotiform OZR 20×10.5″ wheels in matte anthracite. A larger set of brakes were fitted all around the vehicle for style and to improve stopping power. The concept was equipped with several other accessories for holding mountain biking gear like helmets and air pumps. The Black RiNO Concept will be shown off at various events around the country during the year as pandemic restrictions allow.