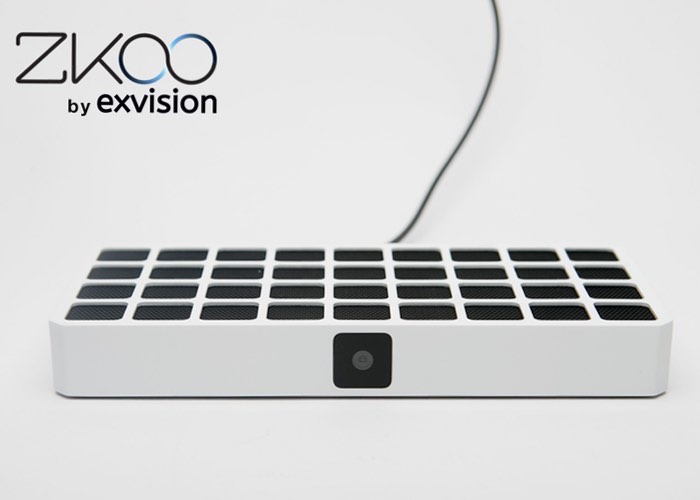 Exvision has launched its first Kickstarter campaign this week for the ZKOO that takes the form of an advanced gesture tracking camera that is compatible with a wide variety of different operating systems including Windows and Android and even supports the Nvidia Shield and Nexus 6 hardware.

The ZKOO gesture camera has been designed to provide a unique way to interact and play with your existing games and applications using the systems you already have in place. Watch the video below to learn more about the palm sized ZKOO gesture tracking camera and see it in action.

Exvision are aiming to raise $15,000 over the next 40 days to help take their project into production and the camera is capable of sensing 100 frames per second while offering high-speed vision to pick up even the smallest of gestures. The developers of ZKOO explain little more :

We’re excited to introduce you to ZKOO (zee-koo) — the world’s most responsive and accurate hand gesture tracking camera. ZKOO delivers High-Speed Vision technology to the living room with a fun and unique new way to play and interact with hundreds of your existing games and apps.

With ZKOO, you can turn your Windows PC, Android Set Top Box, Tablet, and Phone into fun and exciting motion gesture-controlled devices. ZKOO gives you the freedom to play and interact with your games and apps hands and touch-free.

ZKOO works out of the box with all Windows PCs (7, 8, & 10), and many popular Android devices (including the NVIDIA Shield and NEXUS 6). ZKOO is compatible with hundreds of existing games and apps, including popular titles such as Angry Birds, Cut the Rope, Fruit Ninja, Candy Crush, and more.

– Fast (extremely low latency), accurate, and robust hand gesture tracking captures your hand gestures from a distance of up to 10 feet.
– Simple gestures translate into “Air Touch” controls, allowing you to interact and play your existing mobile games and apps in a brand new way.
– Use your hands to type words directly into the TV screen without a remote, keyboard, or mouse.
– Various hand control gestures include hover, click, drag, and pinch and hold.
– Works out of the box with hundreds of existing Android mobile and Windows 7, 8, 10 games and apps.
– Sits on the top of TVs with a flexible clamp mechanism, and also has an optional screw hole to fix on to tripods.
– Super simple and quick setup — just plug the ZKOO into your device’s USB port, launch the ZKOO software, then launch a game or app and you are good to go!

So if you think ZKOO is something you could use jump over to the Kickstarter crowdfunding website to make a pledge from just $60 for early bird backers to make sure you get one of the very first of the production line, as well as a 50 percent saving of the standard retail price of $120.