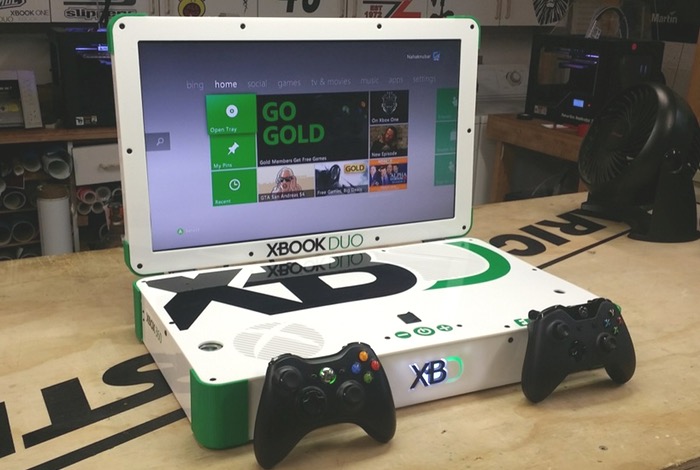 Eddie Zarick has this week unveiled his latest game console laptop in the form of the XBook Duo that combines both a next-generation Xbox One and an older Xbox 360 console into one portable games console complete with 22″ Vizio 1080p LED LCD monitor.

Eddie has already created a number of portable games console laptop systems modifying the PlayStation 4, Xbox One, PS3 and older Xbox 360. This latest system has been built as a proof of concept to see whether the two consoles could be combined into one laptop.

“The first dual game system laptop. The XBOOK DUO has both a XBOX 360 and a XBOX ONE installed on the inside.

The 360 fits snuggly on the left side of the unit with the disk drive exiting from the left side. The One is up towards the top right and, you guessed it, ejects on the right side of the unit. The whole thing only requires one cord. The xbox power supply is also installed internally and is able to power both XBOXs, but only one at a time, which is all you would use anyway.

There is a main switch that you can choose whether you are using the XBOX 360 or the XBOX ONE. The HDMI outputs from the two xboxs run into a smart HDMI switcher that automatically switches to the active input.

The HDMI then comes out of the switcher into a splitter that allows you to use the built in 22″ Vizio 1080p LED LCD monitor, or to the HDMI output on the back of the unit to play on the big TV at home. ”

For more information on the new XBook Duo games laptop jump over to the Eddie Zarick website for details and the ability to order your very own console laptop via the link below.