Colin Furze a British designer and inventor that enjoys modifying things in his garage, has created what is thought to be one of, if not the fastest baby stroller in the world, capable of  reaching a top speed of 50 mph.

Colin is hopefully going to secure the title of world’s fastest pram on October 14th at the UK’s Avon Park dragstrip, where all he will need to do to claim the title is reach 30 mph. Watch the video after the jump to get a better idea of the speeds that his pram is capable of reaching. 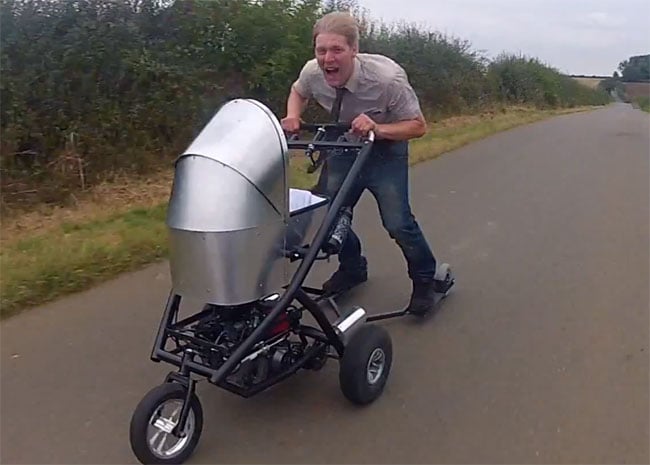 To be able to claim the world record for the world’s fastest baby stroller, Colin needed to design his to allow him to stand in an upright position behind the pram. You can find out more information about this awesome engine powered baby stroller over on Collin’s website. Colin explains:

“So i’m going to be a dad, not the mad crazy inventor thing to do really but it happens to most of us so this is my idea of how to furze up a rather tame women orientated market. I had the idea after everyone i told i was going to be a dad would say “haha i bet your gona make some crazy baby gadget” so i did, and as its an even year and he was to be born near october 14th the date of my record breaking it just seemed the most sensible thing to do “PUT AN ENGINE IN A PRAM” and the megapram was born.”