Because they will burn your house down. In what could pass as the first skirmish between mankind and the dreaded machines, a Tennessee fugitive got his crib reduce to ash after a protracted standoff with the police. Though no video or photo evidence exists of the confrontation, a neighbor attests to witnessing the infernal holocaust. While the house that was the center of the standoff remains a charred ruin, the fugitive himself—perhaps a soldier sent back in time—is nowhere to be found. Escaped? 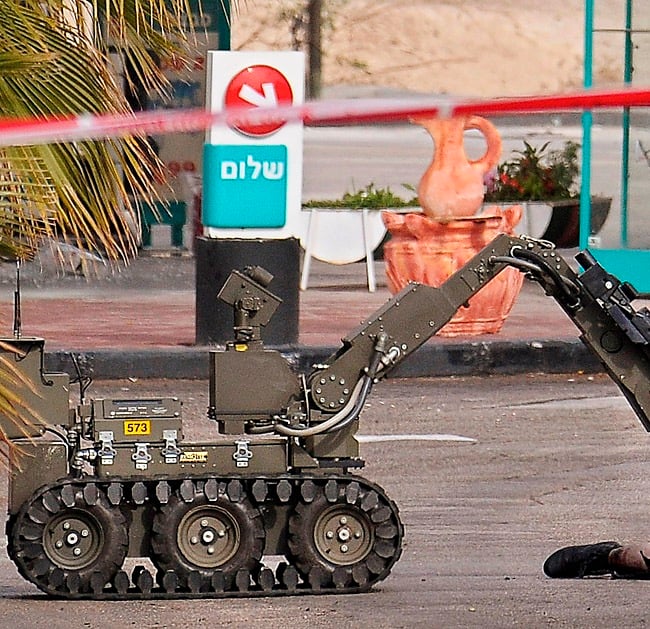 The above is a picture of a security robot from Israel. And yes, it’s inspecting a body.

Federal agents and police from Virginia and Tennessee teamed together that day to round up Junior Kemper Spradlin, 42, who occasionally stayed in the double-wide mobile home belonging to his mother. A high-speed chase that began at a Blountville grocery store led there.

At the time, officers were trying to serve Spradlin with an arrest warrant for second-degree murder, which had been filed in Abingdon. He is charged with the mid-January death of Ronald Wade Roberts, 49, of Nathalie, Va. Roberts died between 24 and 48 hours after a Jan. 15 altercation with Spradlin in Abingdon, police report.

Police radio traffic from that day shows officers believed Spradlin was in the home based on the use of GPS and heat-sensor technology. They also believed he had multiple rifles and pistols inside.

The problem in the whole incident is the tear gas canisters that were supposed to diffuse the situation exacerbated it. Now the prime suspect is either missing or at large and police ordnance turns out to be far deadlier than expected.