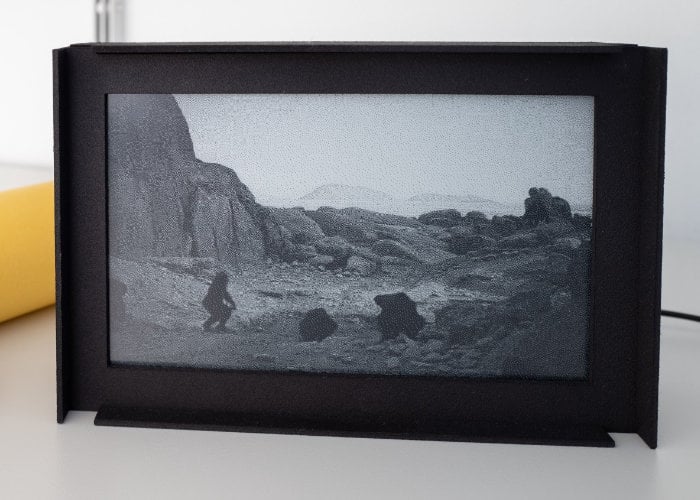 To “celebrate slowness” Bryan Boyer has created a unique movie player that shows just 24 frames every 60 minutes. As you would expect with such a project the Very Slow Movie Player is powered by the awesome Raspberry Pi mini PC.

The unique picture frame displays any film at 24 frames an hour, making each frame last roughly 2.5 minutes as a result. For example Stanely Kubrick’s epic 2001: A Space Odyssey normally runs for 2 hours and 17 minutes but once installed in the Slow Movie Player this is extended to almost a year. Check out the video below to see the Very Slow Movie Player in action. Boyer explains that movies “can be noticed, glanced at, or even inspected, but not watched.”

“Can a film be consumed at the speed of reading a book? Yes, just as a car city can be enjoyed on foot. Slowing things down to an extreme measure creates room for appreciation of the object, as in Brasília, but the prolonged duration also starts to shift the relationship between object, viewer, and context. A film watched at 1/3,600th of the original speed is not a very slow movie, it’s a hazy timepiece. A Very Slow Movie Player (VSMP) doesn’t tell you the time; it helps you see yourself against the smear of time.”

“VSMP is an object that contains a Raspberry Pi computer, custom software, and a reflective ePaper display (similar to a Kindle), all housed inside a 3D printed case. Every 2.5 minutes a frame from the film stored on the computer’s memory card is extracted, converted to black and white using a dithering algorithm, and then communicated to the reflective ePaper display. This adds up to playing the film at a rate of 24 frames per hour, which is in contrast to the traditional speed of 24 frames per second. That’s the slow part, obviously.”