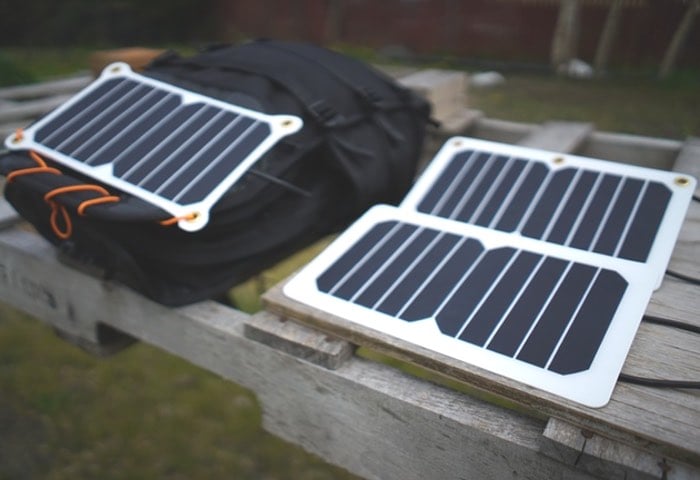 If you need to keep your gadgets and devices charged whilst away from the grid, you may be interested in a new USB solar charger which has been created by Isaac Porras called Solarpad.

SolarpadIs an ultra lightweight USB solar charging system that weighs less than 150g and can be fitted to a tent, backpack or anything else make sure you capture as much sunlight as possible to charge the included battery.

Compatible with Most USB Devices – Charge your phones, cameras, music players, Bluetooth speakers, GPS devices, and more! If it’s about the size of a Smart Phone, the Solarpad Kit can charge it. Connect the charge cable that came with your smart phone, or other USB device, and plug it in to Solarpad or Power Core.

Unparalleled performance – Solarpad in full sun or a fully charged Power Core will recharge a dead iPhone from 0% to 100% in 3 hours! Other similar sized solar chargers can only charge a Smart Phone from 0% to 70% and take over 4 hours to recharge. Tips and Tricks on using a solar panel to charge your devices :

– Keep the solar panel near the top of your backpack facing up toward the sun.
– Keep your phone and battery out of direct sun and in the shade or in a bag. Excessive heat can damage batteries.
– Best times to solar charge is from 8am to 4pm in the summer and 10am to 2pm in the winter. Atmosphere absorbs considerable sunlight when the sun is at low angles in the sky, so avoid charging phones too early or late in the day.
If using Solarpad with the Power Core battery, allow Power Core to charge about 10 to 15 minutes before plugging in your phone.
– Avoid charging behind a window because glass absorbs some light radiation and lowers solar power output.
– Always try to aim Solarpad directly at the sun and never aim Solarpad at any sideways or down angle.
– Phones tend to deal with direct solar energy badly because of power fluctuations, so use Solarpad with the Power Core battery when charging phones for best results.
– Try using apps like this that can show where to place Solarpad in order to avoid obstructions like trees throughout the day: http://www.sunsurveyor.com
– Under low power conditions like thick clouds, shadows, sunrise, sunset, or dead Power Core, try unplugging phone and turning on airplane mode to avoid flashing charge screen and draining phone battery.
– Make sure Power Core and phone are fully charged before any long trip.
– Take advantage of times when you can rest and solar charge at maximum power like eating lunch in a clearing or at a picnic table. Solar charging is more difficult while on the move because of shadows and non-optimal angles of the solar rays.