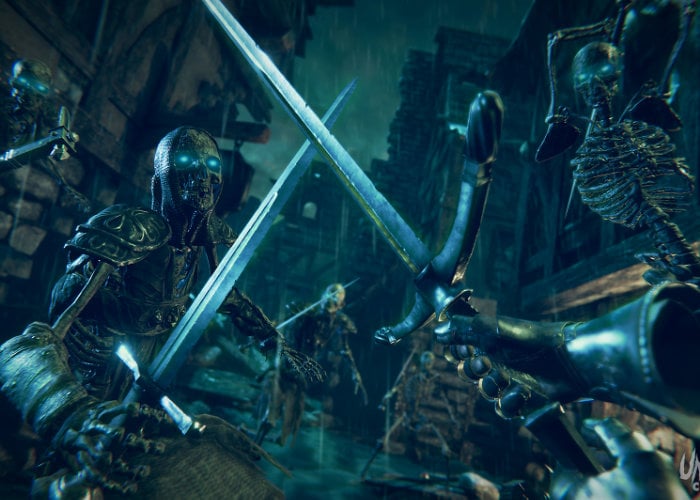 Dark Curry the development team behind the virtual reality zombie slaying, adventure game Undead Citadel, has released a new gameplay trailer this month providing a glimpse at what you can expect from the game which is expected to launch via Steam sometime during Q2 2020.

“Exclusive for VR, UNDEAD CITADEL immerses you into an adventure encountering hundreds of Undead in breathtaking combats crammed with numerous foes. Slash, stab, crush, shoot or dismember with your own hands, as you find the way into the depths of the cursed citadel. Wreak havoc through the undead plague and feel like a real bad ass in this unique physics-based medieval combat VR title. Ruthlessly cut, stab, smash, shoot or blow up your foes with a large variety of melee and ranged weapons as you explore the cursed citadel.”

Features of the VR zombie slaying game include :

– ”Hybrid physics” combat system
– Prioritizes the player’s 1:1 movement for total combat control
– There is no delay between your real and virtual hand
– Experience realistic physics when you slash, stab or simply destabilize your enemy.

– Loads of weapons and potions
– Over 60 hand-to-hand combat weapons, including swords, axes, war hammers, maces, shields, two-handed weapons, etc.
– Bows, arrows and explosives for ranged attacks.
– Each type of weapon has its own characteristics. Use them intuitively!
– Look at their strength and durability attributes to decide on which one to keep
– Find and use slow motion, strength, or freeze potions to mutate your power and obliterate the living dead.

– Dozens of different enemies
– Confront the Undead in different states of decomposition
– Before you attack, be aware of their different armors, protections and weapons.
– Dodge or block their attacks with your weapon, find their weak spot and deliver a mortal blow.
– Keep their weapons! They won’t need them any more