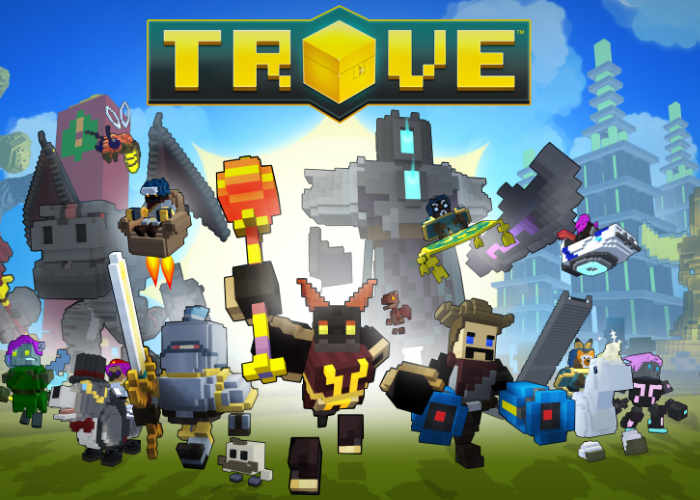 The Trove open beta is now underway on both the PlayStation 4 and Xbox One, allowing console gamers to get a taste of what they can expect from the Trove game when it finally launches on console systems.

Trove isAlready available to play on PC and Mac systems and offers a online multiplayer game where 1 to 60 players to face the action. Learn more about the Trove open beta on the official website via the link below.

Thirsting for danger and lusting for loot? Grab your friends, hone your weapons, and set off for adventure in this free-to-play, voxel-based action MMO. Whether you’re looking to battle deadly monsters and loot epic treasures, ride a dragon through weird and wild realms, build brand new worlds, or just show your own, special style, Trove’s multiverse has something for you!FEATURES14 Cubular ClassesPlay as foxy lancers, draconic mages, flower-powered healers, headless knights, and more!

Nearly Infinite RealmsConquer everything from the pirate-infested Treasure Isles to Candoria, home of the Candy Barbarians. Dangerous DungeonsFace deadly challenges and collect powerful armor and weapons.Build a Home, Build a WorldMake your mark by building a home away from home… or an entire world!Player Created ContentCollect a HUGE range gear made by your fellow players! Dragons? Check. Bacon swords? Yup. Rainbow-grade 3D glasses of insufferable doom? Just the tip of the iceberg!

• Trove’s Open Beta is an early look at the game that we’ll be launching on consoles in the coming months.
• We have more work to do before we’re ready for prime time and we need your help! We have our own road map of what to improve between this Beta test and launch, and your feedback is vital to helping us stay on the right track.
• We’d love to hear what you think about the game as it is today and how you feel about the things we have in store.
• The dev team will be updating you regularly with everything that’s going on between now and launch!
• It’s an open Beta test so everyone is welcome to join us!
• One of the things we’re working on is an improved control scheme and your feedback will help shape how the game is played.
• Create Clubs (similar to guilds) with your friends and build wonders beyond imagination together. Club Worlds are open spaces for building that cannot be modified by visitors.
• If you’re more of a fighter than a builder we’ve got you covered. Explore our vast adventure worlds to take down enemies in the open world or in our massive selection of dungeons.
• Pick from 14 unique classes to suit your style.