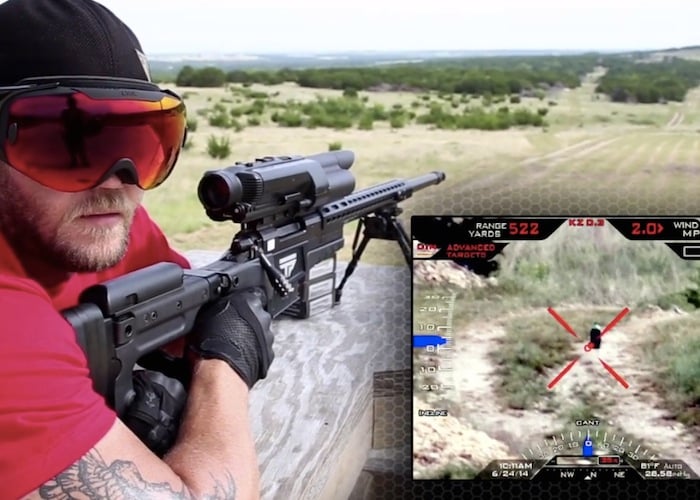 As if from a futuristic movie a sniper with gun fitted with TrackingPoint technology has been able to make a 500 yard shot without even needing to look at the target.

The sniper was equipped with off-the-shelf Android powered Smith Optics I/O Recon goggles which were connected to the TrackingPoint’s ShotView targeting system.

The sniper then used the application to view streamed video from a Precision Guided Firearm’s Networked Tracking Scope to take a precision shot at 500 yards while looking in the other direction, simply by squeezing the trigger. Check out the video below to see the shot and technology used in action.

“The Precision Guided Firearm (PGF) developed by TrackingPoint is the most accurate shooting system in the world. Called the Xact SystemTM, it solves multiple problems that long range shooters face. The Xact System ensures repeatable performance and accuracy even at extended ranges.

Long-range shots have historically been challenging for big-game hunters. That’s because shot accuracy is diminished by multiple variables: wind speed and direction, curvature of the earth, recoil, and human error caused by range miscalculation and jitter. The PGF also offers applications for smart devices. These apps interact with embedded wifi servers to share real-time or recorded images.”

For more information about the TrackingPoint technology jump over to the official website for full details.