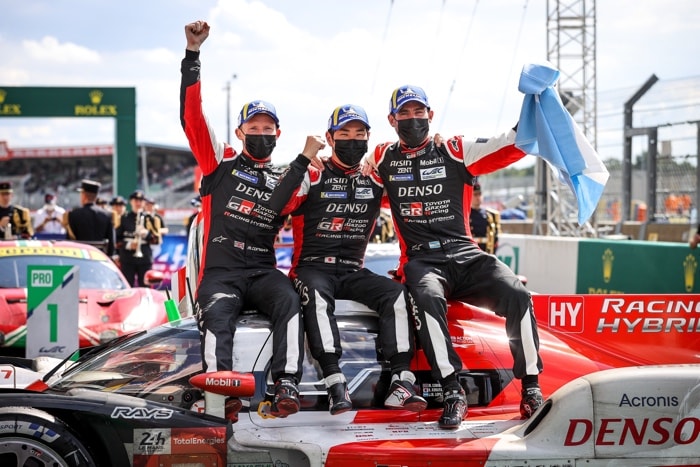 Toyota has won the Le Mans 24hr race for the fourth year in a row, with their #7 GR010 HYBRID with Mike Conway, Kamui Kobayashi and José María López.

The race ebbed and flowed between the two cars, with slow zones and safety cars contributing to a fluctuating gap, with the GR010 HYBRIDs holding a clear lead over the chasing pack, led by the #36 Alpine, which was off the lead lap.

As the race entered its final 12 hours, Kamui had stretched the #7 car’s lead to just over half a minute, with Brendon chasing in the sister car. When Kazuki took the wheel of the #8 after 14 hours, the team swapped the front end to rectify a drop in aerodynamic performance caused by minor damage.

Nerves were stretched in the TOYOTA GAZOO Racing garage as the final quarter of the race approached. An issue on the fuel system of the #8 car prevented it completing full stints. Over consecutive fuel stops, it returned to the pits earlier each time as the team worked intensively to find a solution.

You can find put more details about Toyota winning this years Le Mans 24hr race over at the Toyota website at the link below.