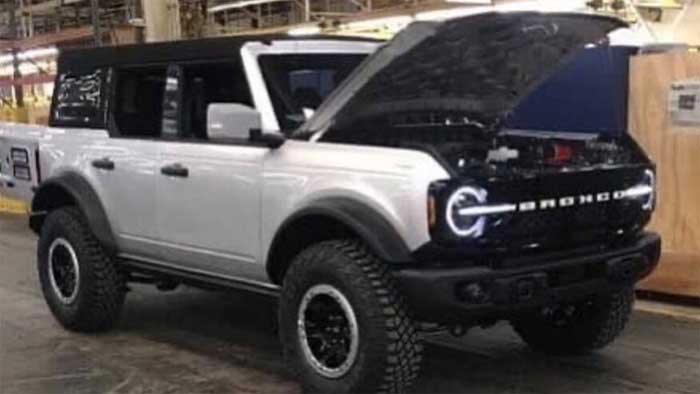 The vehicle seen in the images here appears to be sitting in a factory somewhere as the final touches are placed on the vehicle. The image claims to be the actual 2021 Ford Bronco, but there is some debate on if the image is real or not. MotorTrend says that internally its staff is torn on whether or not the image is legitimate. They point things like the matte black fender flares that appear to be too shiny and tacked on the look of the side mirror.

That side mirror looks legitimate to us; several patents have said that the mirror would sit on the A-pillar rather than the door because the doors of the Bronco are supposed to be removable. It’s hard to tell what the front profile of the Bronco will look like since the hood is up, but it’s not quite what I expected.

Whether or not the image is real remains to be seen as the unveiling of the 2001 Ford Bronco is supposed to happen this month. If this is the real deal, it’s likely one of the hotter off-road versions that have been rumored looking at the beefy tires and what appear to be bead-lock wheels. We are rather torn on if we like the style seen in this image and will wait until we see it in bright images with the hood closed to decide if we like it or not.