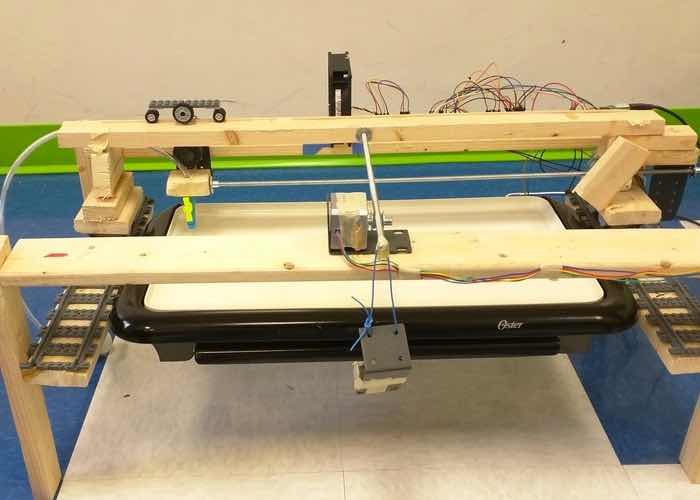 Have you ever fancy creating your own custom shaped pancakes? If you have then a new pancake printer currently in development and launched over on the Kickstarter crowdfunding website might be the perfect addition to your kitchen utensils.

To create a custom pancake shape users simply draw their required design onto a touchscreen, the pancake printer then creates a custom shape using 3D printing technology and pancake batter. To learn more about this very unique and original twist on the 3D printing genre watch the video below.

“Introducing the world’s first Pancake Printer! We are a group of high school students working on a project that can print pancakes out in shapes drawn by users on a touchscreen. The Pancake Printer started as an idea at lunch in the fall of 2013, and we began working on the project in late 2013.

In December of 2014, we finished a fully functioning prototype that was revealed and displayed at a breakfast for our classmates put on by the school’s PA. Our classmates were able to draw their pancakes on a touchscreen laptop, and when they pressed Print, the drawing was sent through a program we developed using the Python programming language through a serial port and into the machine’s ‘brain’, which is written in the Spin language.

The project in its current state (as shown in the 1st picture and the video) is fully capable of moving with decent precision and drawing the shapes sent to it. (The video shows a testing session where the printer printed “hi” in cursive using an expo marker taped to the nozzle rather than real pancake batter. Unfortunately we didn’t get any videos of the printer working at the breakfast with real pancake batter.)

The problem we now face is making the printer more precise. Right now it is constructed using wood and screws, and this hurts its ability to place the pancake batter onto the griddle beneath with the precision we need. Our plan is to use the funds we earn through Kickstarter to submit the 3D model we are designing (shown in the 2nd picture) for 3D printing so we can construct the final version with the exact dimensions and precision we need to print some pretty awesome pancake designs.”

So if you think pancake printer is something you would like help develop, visit the Kickstarter website now to make a pledge and help pancake printer become a reality via the link below.