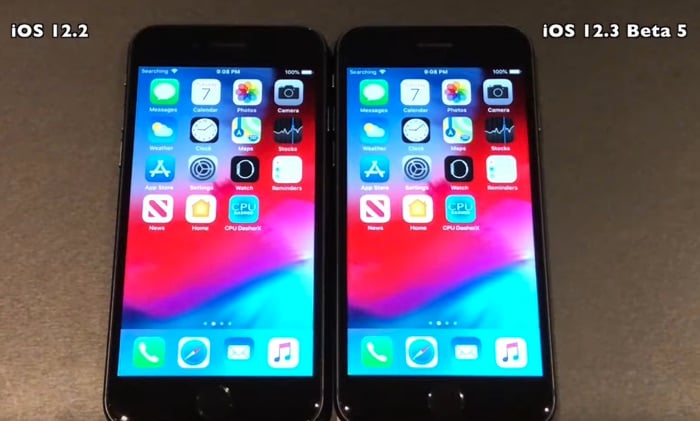 Apple’s fifth beta of iOS 12.3 is now available to both developers and public beta testers and now we have some speed tests of iOS 12.3 beta 5 vs iOS 12.2.

In the previous speed tests we saw there were no major speed improvements over iOS 12.2, the latest tests are run on a number of devices, including the iPhone 5S, iPhone 6, iPhone 6S, iPhone 7 and iPhone 8. First up is the iPhone 5S.

As we can see from the video the handset running the new beta of iOS 12.3 booted up slightly faster, there do not appear to be any speed improvements in the apps, next is the iPhone 6.

With the video featuring the two iPhone 6 handsets, the iPhone running the current release of iOS 12.2 booted up faster than the one with the new beta. Next is the iPhone 6S.

As we can see in the video with the iPhone 6S, the device running the new beta booted up a split second faster than the handset running the current release, there do not appear to be any improvements in the apps, next is the iPhone 7.

In the video with the iPhone 7, the handset running iOS 12.2 booted up a split second faster than the device with iOS 12.3 beta5, there were no improvements in the apps, finally we have the iPhone 8.

With the iPhone 8, the handset running the current iOS 12.2 booted up quicker, there were no speed improvements in the apps. It looks like iOS 12.3 will not bring any major speed improvements to the iPhone. We are expecting the final version of the software to land some time this month.