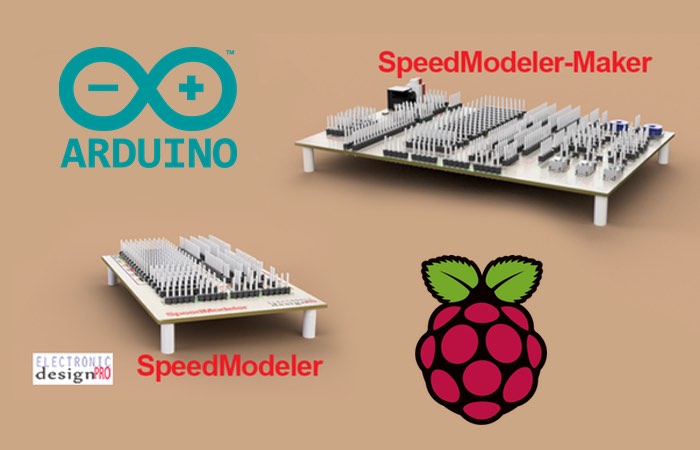 Electronics enthusiasts that are looking for a quick way to prototype designs may be interested in a new platform which has been created by Drew Forrest and launched by Kickstarter.

Speed Modeler has been created to provide a solderless electronic prototyping platform that is compatible with a wide range of different hardware including popular platforms such as Arduino, Raspberry Pi, ARM and many more.

Just like me, most Engineers to Maker/DIY’s like to build things, lots of things. I and most of the folks I know that build things don’t actually have the patience of Edison who refined the light bulb 10,000 times, we want it working much faster. That’s what SpeedModeler does.

It is not brain surgery, or even deep electronics technology. It just makes prototyping, refining, re-working, bringing up a new circuit board, and modifying the variables that make the project perfect, RAPIDELY. After the first SpeedModeler prototype was built, I used it to modify a new board being tested. It was great to not have to solder, test, de-solder, re-solder, test – and again, and again, probably saved 30 – 40 minutes. And time has a value….

SpeedModeler-Maker brings everything that the core product does, with many extras. It gives you the capability to model many other components (nFETs, pFETs, different types of diodes, potentiometers, LEDs and of course switches), gives you jumper blocks, and every project needs the included 3.3 or 5.0 volt power supply. Check out the graphics below for all the features.

Prototyping kits that use caps, shields or option boards that attach to the top of the development board will come with extended pins for the adaptor board.

Graphic pin breakout overlays for the Maker adapter board provided for each specific development kit. And if you don’t see your current adapter listed (see list below) today, just ask us and we will probably make one for your system preference. You can always just use jumpers between the development board and the SpeedModeler-Maker.

Jump over to the Kickstarter website below to help bring Speed Modeler into reality with pledges starting from just $17 and shipping expected to take place during December 2016.