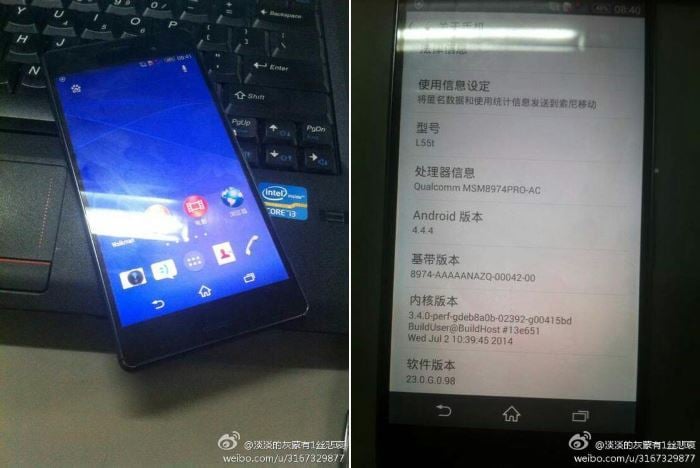 We’ve seen a handful of rumors about the purported Sony Xperia Z3. The alleged handset has posed for the camera on a number of occasions in the past, and today is not different as well.

Some images of the alleged Sony Xperia Z3 made their way to the internet, surfacing from Chinese shores, in all its glory. If you take a closer look at the leaked images, the handset looks quite similar to what we’ve already seen before in leaked images.

It seems it follows the design cues from the Xperia Z2 which was released earlier this year at the MWC 2014, but we can expect decent changes in the internals. According to previous rumors, the alleged Sony Xperia Z3 will come with a 5.2-inch display sporting a resolution of 2560 x 1440 pixels, as well as a quad-core Snapdragon 801 SoC with 3GB of RAM and 16GB internal storage with a microSD card slot on board.

The image shows there’s a 20.7MP camera on the back, a one similar to the Xperia Z2, and runs Android 4.4.4 Kitkat as its operating system. It looks a little surprising to see that most of the internals are the same except the OS and the display, but it’s likely that we may see a better bump in the specifications, at least a Snapdragon 805.

Rumors suggest Sony will unveil the handset in September at IFA 2014, alongside the compact version of the handset. We’ll update you as soon as we get more information.