Sony Honami has seen its fair share of rumors in the past few days. The device was teased by Sony on its Twitter account on several occasions telling us that it’s going to be the “best of Sony”. We have seen the device getting leaked in a number of photos, videos and what not. 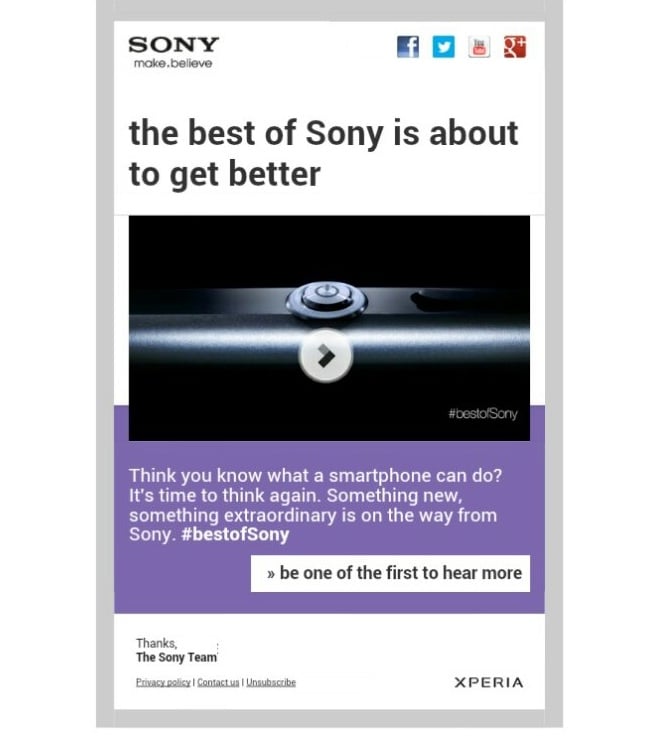 Now, Sony is sending out emails to all those users who are in its distribution list. The email says that something extraordinary is on its way. There is an image of the alleged Sony Honami in the email as well that point towards the possible launch of the device.

According to the email, “The best of Sony is about to get better…. Think you know what a smartphone can do? It’s time to think again. Something new, something extraordinary is on its way from Sony. #bestofsony.”

We would be simply fool enough to think that the company is talking about anything other than its flagship device, Sony Xperia Honami. The device is expected to make its first official appearance in Berlin on 4 September. Sony sent invites to the media about the timing and location of the event few days back. Rumors also suggest that Sony will also unveil the miniature version of its flagship device featuring top of the line specifications.

I can’t wait for September 4 as its going to be the day when we will see a number of high-end devices, not only Honami. Samsung is also expected to launch Samsung Galaxy Note 3 as well as Galaxy Gear smartwatch. The news about the launch has been confirmed lately by Samsung execs during an interview.