It also comes with a wireless remote, which gives you full control over your iPhone or iPod Touch, and this one is designed to be more compact than previous models. 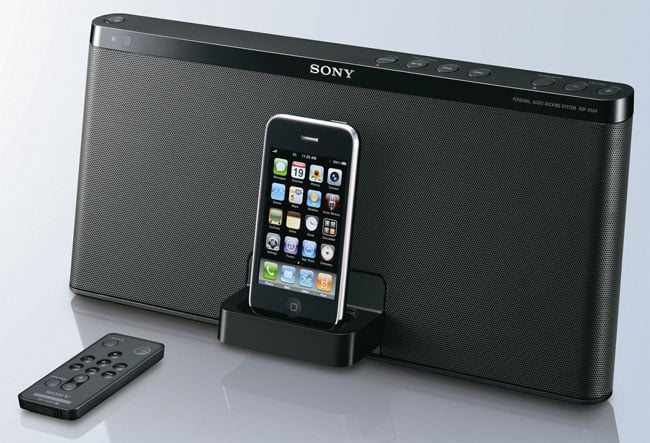 You can see full details on the Sony RDP-X50iP iPhone and iPod dock in the press release below.

The RDP-X50iP is the latest addition to the growing range of Sony speaker docks for the Apple iPod and iPhone. It resembles the existing RDP-XF100iP and RDP-X80iP models, but the design focus is on delivering the best possible audio quality at a price with the widest appeal.

The heart of the RDP-X50iP is a specially designed digital amplifier and long-stroke driver units capable of delivering 20W + 20W RMS – in other words, real room-filling power.

Using the RDP-X50iP is simplicity itself: just slip in your iPod or iPhone for a charge and enjoy your favourite music at the same time. The omnidirectional infra-red remote gives you full iPod/iPhone menu control of music functions, so everything works just the way you would expect.*

Rather than relying on various pre-set modes for different styles of music, the RDP-X50iP is optimised for general use and will reward the listener with its sound whatever is playing. It looks as good as it sounds, with a restrained, minimalist design that is hugely versatile and will harmonise with virtually any interior.

With the launch of the RDP-X50iP, Sony has made an important extension to its already well-received range of speaker dock products. Music lovers who want the best audio quality in a streamlined and attractively–priced system now have just what they have been asking for.

The RDP-X50iP is compatible with iPhone 3GS and current iPod models.