Sony’s upcoming flagship device has been teased in a number of pictures by Sony itself, but do you know that the Japanese manufacturer has a miniature version — Sony Honami Mini — of the device in works. Now, we have some more details about the device. It appears as if Honami Mini will feature the top of the line specifications as the flagship device. 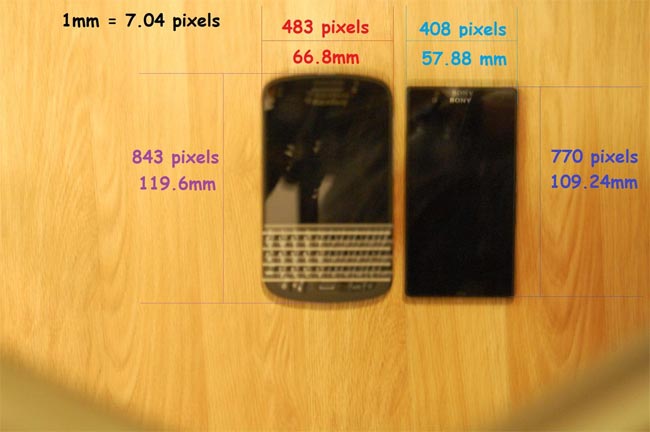 Rumors emerge from Japanese blog that suggest that it will bring similar specifications as the flagship device. Along with the specifications, Honami Mini also made its first unofficial appearance in a leaked photo right next to Blackberry Q10, courtesy of XDA-Developers forum.

According to the report, the device will feature Snapdragon 800 chipset clocked at 2.2GHz, 2GB RAM, 16GB onboard storage, 2,400 mAh battery and runs Android 4.2.2 on top of it. The report mentions that device will feature a 4.3 inch display with 720p resolution and will feature a similar 20.7 megapixel camera with G lens as the bigger Honami. On the connectivity side, the device features WiFi a/b/g/n, NFC and LTE technology.

Well, if we take a closer look at the images leaked on XDA-Developers, the device is visibly smaller compared to Blackberry Q10. If you don’t know, Blackberry Q10 measures 119.6 x 66.8mm in dimensions while the leaked Honami is 109.2 x 57.88 mm, according to numerical calculations of one XDA member. This shows that the device should feature a screen size close to 4 inches, not 4.3’.

So, which source to believe? I’d say just take both rumors with a grain of salt as Sony has scheduled an event on September 4 where the company is expected to unveil its flagship device – Sony Honami i1. If the rumors are correct, we’d see the miniature version of the device on the same event. What do you think? Are they real?