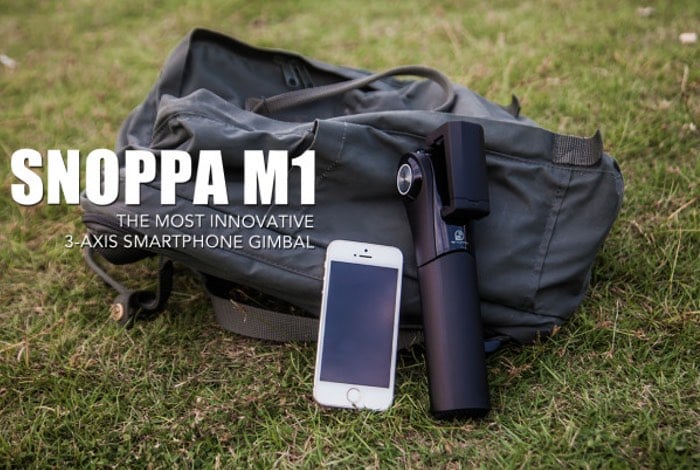 Smartphone photographers that are in search of a compact portable 3 axis smartphone gimbal system to help create supersmooth professional videos, may be interested in a new piece of kit which has been created by Snoppa called the Snoppa M1.

The Snoppa M1 is available to backfire Indiegogo with pledges starting from just $59 and shipping expected to take place during December 2016. Watch the video below to learn more about this pocket sized 3 axis gimbal system which can be used with any iOS or Android smartphone.

The Snoppa M1 is the world’s most advanced three-axis gimbal, which allows anyone to shoot stunning professional-looking films from their smartphone. With its intelligent three-axis system, sleek compact design and multi-mode shooting functionality, anyone can be a videographer. Say goodbye to shaky or blurry video footage with a pioneering new smartphone gimbal.

Anyone with a smartphone is now a videographer and photographer, and sharing creations on social media is now second-nature. However, shooting stable videos or photos with handheld smartphones is almost impossible.

The Snoppa M1 with its 3-axis stabilizer was created to solve this issue and give any smartphone user the ability to master cinematography at an affordable cost, instead of investing in expensive professional filming equipment. We hope everyone can enjoy the fun of creating smartphone photography and videography with ease. Snoppa M1 is the world’s first 3-axis smartphone gimbal to work without motor arms or extra weights.

For more information on the new Snoppa M1 jump over to the Indiegogo website for details by following the link below.