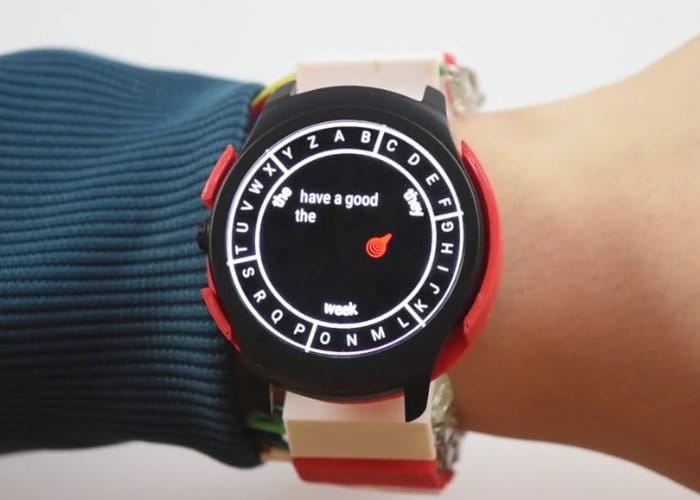 An interesting solution using hand gestures to entering text on a smartwatch has been created by a team of researchers at Dartmouth College who have created the WrisText system. Text can be entered using one hand moving any target to six sections of letters selected by the movements of one’s wrist.

Watch the demonstration video below to learn more about the prototype concept which currently uses Arduino DUE to pass information to a computer, along with proximity and piezo sensors to detect hand and finger movements.

“We present WrisText – a one-handed text entry technique for smartwatches using the joystick-like motion of the wrist. A user enters text by whirling the wrist of the watch hand, towards six directions which each represent a key in a circular keyboard, and where the letters are distributed in an alphabetical order.”

“The design of WrisText was an iterative process, where we first conducted a study to investigate optimal key size, and found that keys needed to be 55o or wider to achieve over 90% striking accuracy. We then computed an optimal keyboard layout, considering a joint optimization problem of striking accuracy, striking comfort, word disambiguation.

We evaluated the performance of WrisText through a five-day study with 10 participants in two text entry scenarios: hand-up and hand- down. On average, participants achieved a text entry speed of 9.9 WPM across all sessions, and were able to type as fast as 15.2 WPM by the end of the last day.”

For more information jump over to the project research paper by following the link below. Let’s hope the team is able to take their concept to consumer level so we can all benefit from the awesome text input system they have created.