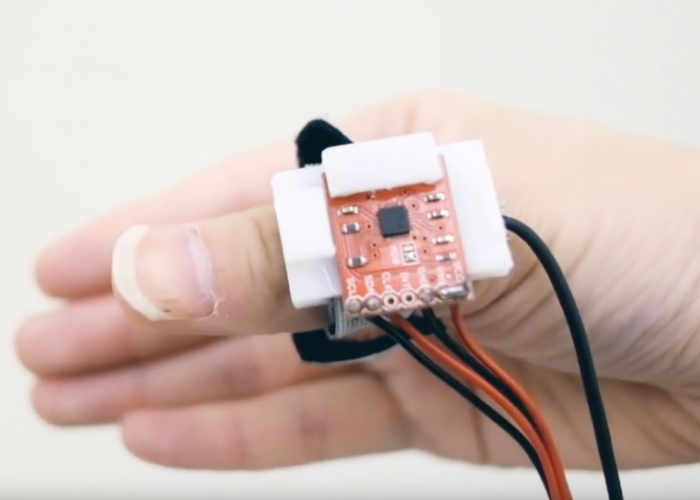 Researchers at Georgia Tech have created a new smart ring called Fingersound that allows people to trace letters and numbers on their fingers and see the characters appear on a nearby computer screen. The new technology is controlled by a thumb ring equipped with a tiny microphone and gyroscope. Using different gestures the wearer can spell out words and characters. Watch the demonstration video below to learn more. Thad Starner, the Georgia Tech School of Interactive Computing professor leading the project explains more :

When a person grabs their phone during a meeting, even if trying to silence it, the gesture can infringe on the conversation or be distracting. But if they can simThisply send the call to voicemail, perhaps by writing an ‘x’ on their hand below the table, there isn’t an interruption.

While other gesture-based systems require the user to perform gestures in the air, Fingersound uses the fingers as a canvas. This allows the system to clearly recognize the beginning and end of an intended gesture by using the microphone and gyroscope to detect the signal. In addition to helping recognize the start and end of a gesture, it also provides tactile feedback while performing the gestures. This feedback is crucial for user experience and is missing on other in-air gestures. Fingersound sends the sound captured by the contact microphone and motion data captured by the gyroscope sensor through multiple filtering mechanisms. The system then analyzes it to determine whether a gesture was performed or whether it was simply noise from other finger-related activity.

For more information jump over to the Georgia Tech website by following the link below.