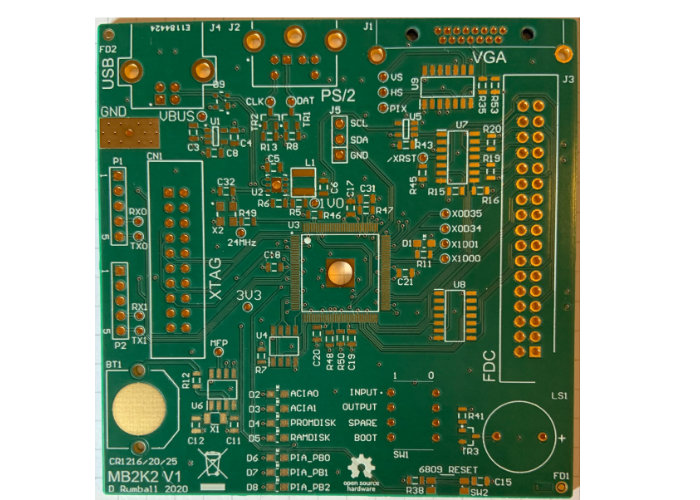 The development team at AVED based in the United Kingdom, have created a new bare PCB for the Microbox 2K2 6809 and FLEX based single board computer. Making it available via Tindie for just $10. The initial firmware release supports:-

“The MB2K2 is a hardware based emulator built around an Xmos XU216 SoC where each of the 16 RISC cores in the XU216 map onto one of the individual LSI chips in the system being emulated, CPU, PIA, ACIA, GDC etc. The XU216 has 512KB of internal RAM and boots from an external QSPI serial flash device that holds the Xmos firmware and the promdisk for the 6809. As well as the XU216 the PCB includes a battery backed RTC, LEDs and DIP switches, VGA based video out, PS/2 keyboard interface and a USB connector for power and dual high speed serial ports which appear as CDC class virtual com ports to a Windows, MacOS or Linux based host computer.

The PCB has an abundance of test points and features to aid firmware development and is designed with an eye to easy manual assembly.

The MB2K2 is highly customisable. Xmos supply a free Eclipse toolchain that includes an IDE, compilers and debuggers that work with a low cost USB to JTAG debug interface allowing the user to change the MB2K2’s firmware. Although initially the MB2K2 has been used to emulate the MB2, there’s nothing to stop the emulation of other systems, processors and LSI devices.”

For more information about the Microbox 2K2 FLEX based single board computer jump over to the Tindie website by following the link below.