Processing comes in the form of a dual core Intel Atom D510 processor, and graphics is provided by NVIDIA ION 2, it is capable of full HD video in 1080p. 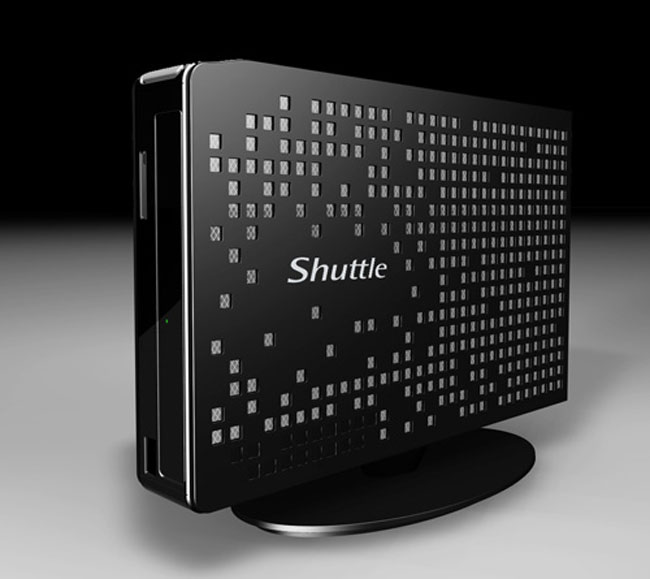 Other specifications include HDMI out, integrated WiFi, and a couple of USB ports. There are no details on pricing as yet, although it is expected to be available from Shuttle later this week.

City of Industry — June 22, 2010 / (http://www.myprgenie.com) — Shuttle, the industry leading designer and manufacturer of high-performance small form factor (SFF) PC solutions and creator of the XPC, was featured on Hexus TV for its upcoming Shuttle X350, the performance pushing addition to the X Series that sets a new standard for slim mini PCs.

“With the Shuttle X100 and X200, the previous generation X Series, Shuttle ‘wowed’ the world with all the power and features that can be packed into a package that’s only about 2 inches tall and no larger than a sheet of paper,” said Nicolas Villalobos, Director at Shuttle Computer Group in Los Angeles. “Now, with the X350, we are upping the ante. It’s about half an inch shorter, quite a bit smaller than a sheet of paper, and really pushes the features and performance limits of what you can do with a PC that’s as small and slim as this.”

The ultra-compact PC platform — Shuttle X350 — is only one-third the size of the previous generation slim PC. At just 1.5 inches thin, the slim design is not only space-saving for projects or applications where space is critical, but it fits easily into any environment with the ability to be mounted behind an LCD TV or LCD monitor. It’s also completely fanless. The internal layout has been meticulously engineered to require no fan, so it’s not only quiet and low in energy consumption, but it’s also dust-free and virtually maintenance free.

Even with the small size, the dual-core Intel(R) Atom(TM) D510 powered Shuttle X350 manages to slip in a space for slim optical drives and the next generation NVIDIA(R) ION (codename: ION 2) graphics with true 1080p HDMI output (optional) for a power-packing slim PC. The X350 will be available for ordering on the Shuttle website starting this week.