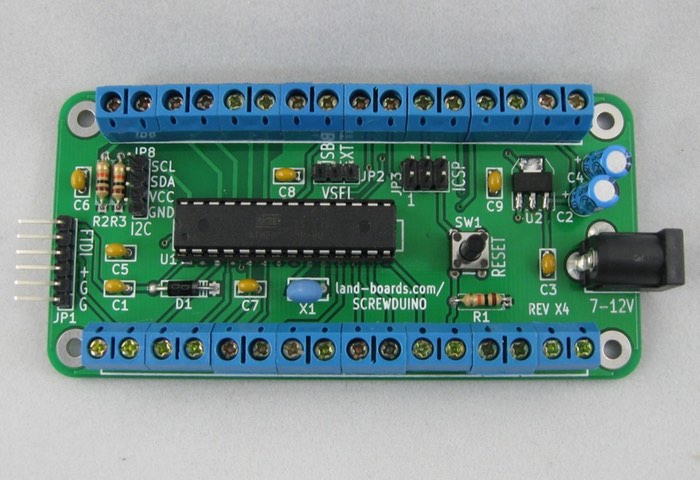 Anyone that enjoys creating projects using the Arduino platform may be interested in a new Arduino compatible development board called the Screwduino that has been designed by Doug Gilliland a launch over on the Kickstarter crowdfunding website.

Unlike other Arduino development boards on the market the Screwduino is equipped with screw terminals that make it easy to connect and disconnect additional components.

Features of the Screwduino Arduino development board include :

• Arduino UNO compatible with Arduino UNO bootloader
• Select UNO in Arduino IDE to download card
• Card has no USB connector/chip so you need to use an FTDI download cable or FTDI to USB interface for USB (not supplied)
• You can also download code via ArduinoISP via the ICSP header
• 4-pin I2C connector for easy attachment of an I2C LCD display and other I2C sensors (like temperature sensors). Beware there are many different I2C pinouts.
• Added 10K ohm pullup resistors (R3 and R4) from the I2C SDA/SCL to +5V If the user doesn’t want the resistors, they can snip them out of the circuit
• Uses through hole parts so that it is easier to assemble. The sole exception is the voltage regulator which is surface mount for heat transfer
• 5mm pitch screw terminal blocks.
• Reset switch.
• 7-12V DC on standard 2.1mm DC power connector
• Power selection jumper (FTDI, Regulator, Screw Terminals)
• Four (4) good mounting holes that use 4-40 screws and have more than enough clearance for screw heads, standoffs and/or nuts.

Visit the Kickstarter website to make a pledge and be one of the first to own the Screwduino via the link below. If you found this project interesting why not build your very own Arduino wind speed meter or anemometer to record the wind speed in your area.