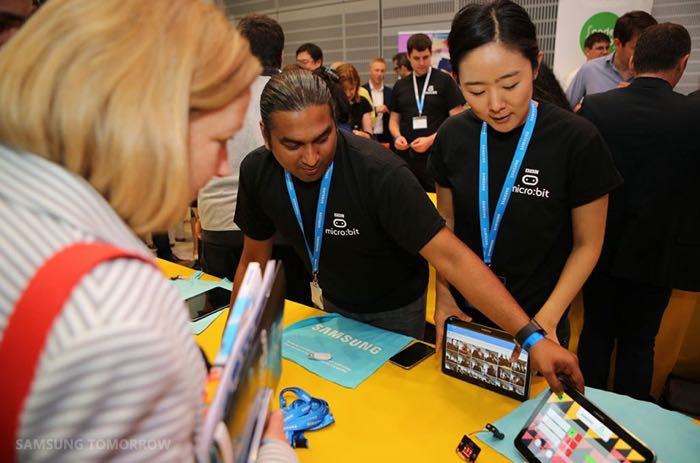 Earlier this week we got to see the new BBC Micro Bit computer, the device will be given away to one million school children later in the year, it will also be made available to buy for hobbyists and computer fans.

The BBC Micro Bit was developed by the BBC in partnership with more than 20 companies and now Samsung has revealed how it helped the BBC develop the device.

Samsung worked with the BBC to get the device to communicate with devices like smartphones and tablets, here is what they had to say about the project.

Andy Griffiths, President of Samsung Electronics UK & Ireland, was in attendance and explained the significance of the product. “At Samsung, we’re very excited to bring the micro:bit to life with the BBC. Our engineers are enabling the micro:bit to communicate with everyday digital devices such as phones and tablets to allow young people to code inside and outside of the classroom.” “It’s a great way to showcase the capabilities of this technology and we’re looking forward to seeing how creative people can get with coding, whether that’s programming their micro:bit to take a ‘selfie’ via their phone camera or coding it to flash when they get an incoming call, the possibilities are limitless,” said Griffiths.

The BBC Micro Bit will be given to school children in September an October, the commercial version of the device will go on sale later in the year, as yet there are no details on pricing.