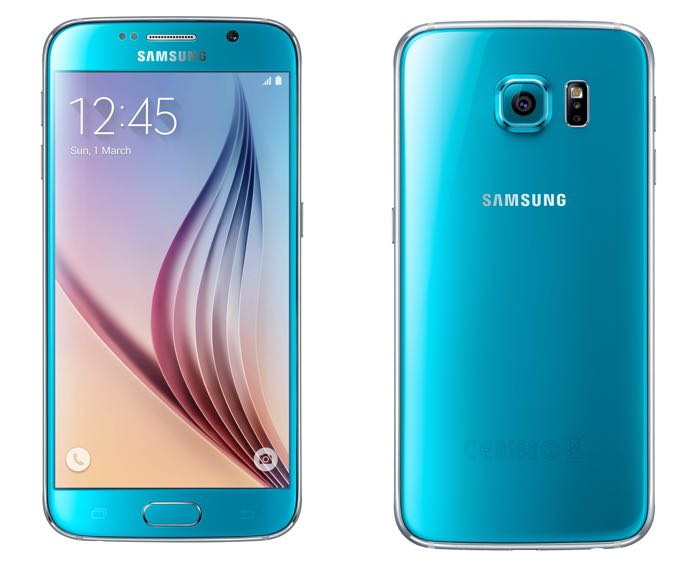 The Samsung Galaxy S6 shares many of the specifications as the S6 Edge, the handset features a 5.1 inch Quad HD display with a resolution of 2560 x 1440 pixels.

Processing on the Galaxy S6 comes in the for of a 2.1GHz eight core Samsung Exynos 7420 processor and the handset also comes with 3GB of RAM.

For storage there is no microSD card slot on the Samsung Galaxy S6 although you can choose from 32GB, 64GB or 128GB of built in storage, there is also a 2,550 mAh non removable battery.

The handset comes with a range of Samsung features including S Health 4.0, Ultra Power Saving Mode, Samsung Pay, Download Booster, Smart Manager and also Microsoft Apps in the form of OneDrive which gives you 115GB of free storage for two years.

The Galaxy S6 is comes with front and rear facing cameras on the front of the handset there is a5 megapixel camera for video calls and on the back there is a 16 megapixel camera with a range of advanced features including Optical Image Stabilization.

The handset comes with 4G LTE with download speed of up to 300 Mbps and it also features 802.11 a/b/g/n/ac dual band WiFi, HT80, WiFi Direct, Mobile hotspot, Bluetooth 4.1, NFC, USB 2.0 and an IR Remote, plus the latest version of Google’s mobile OS Android 5.0 Lollipop.