We have heard various rumors about the Samsung Galaxy S5, the handset is expected to be made official at Mobile World Congress later this month.

Now a photo has appeared online which is reported to be of the retail packaging of the Samsung Galaxy S5, we have no idea if this is the real deal or not. 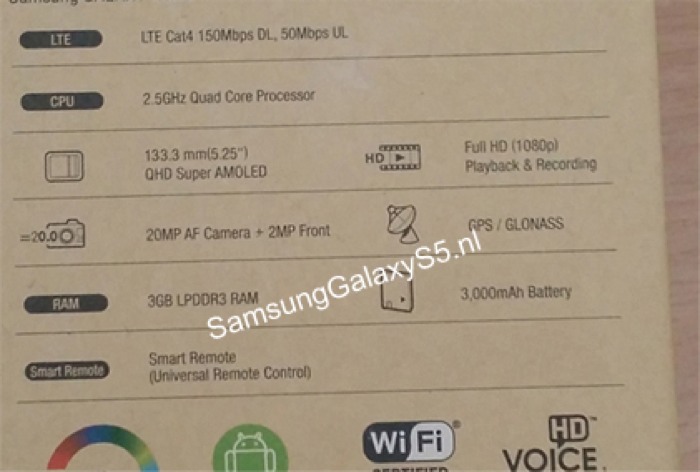 According to the photo above,the Samsung Galaxy S5 will come with a 5.25 inch QHD Super AMOLED display with a resolution of 2560 x 1440 pixels.

Other specifications o the handset include a 2.5GHz quad core processor, which will probably be the new Qualcomm Snapdragon 805 processor, and 3GB of RAM.

The device is listed with a 20 megapixel camera, this is different from what we heard previously, as there have been rumors that the handset will launch with a 16 megapixel Samsung ISOCELL camera.

The Samsung Galaxy S5 will also come with a 2 megapixel camera up front, Android 4.4 Kit Kat, and 4G LTE, plus a 3,000 mAh battery, WiFi and Bluetooth.

What do you guys think from the photo above, is this an actual photo of the retail packaging for the Samsung Galaxy S5 or a fake? Leave a comment and let us know.

We are hoping to get more information on the Samsung Galaxy S5 at Samsung’s Unpacked 5 press event which takes place on the 24th of February.